In 1973, Harry Nilsson recorded a selection of classic 20th-century standards for his A Little Touch of Schmilsson in the Night album. 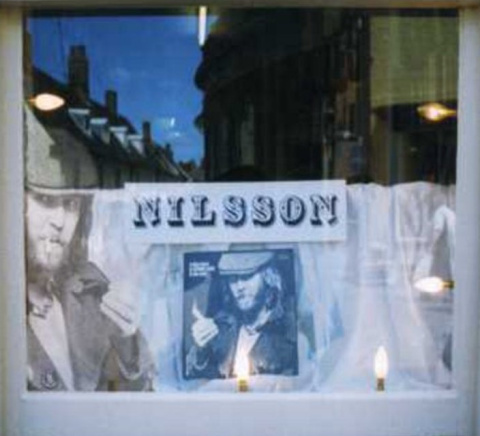 The track listing for this reissue of A Little Touch of Schmilsson in the Night is the same as the As Time Goes By ... the complete Schmilsson in the night CD. The booklet reproduces all the artwork and text from the album cover. The new liner notes are by Andrea Sheridan.

Steven G. Baird picked the 2002 Camden reissue of A Little Touch of Schmilsson In the Night as his choice for the best sounding pop/rock music reissue discovered by the staff of Sensible Sound during 2003.

This album has been a favorite of mine for almost thirty years. It first appeared in 1973 at the time that the artist was reaching the apex of his career. I don't doubt that there were many of his fans that, upon hearing the album, felt that the singer had abandoned them. Since the album offered his interpretations of some vintage tunes of the past--such as "For Me And My Gal" and "Makin' Whoopee" complete with a full orchestral accompaniment led by Gordon Jenkins - it was a far cry from the work that had made him famous, including "Everybody's Talkin'" from the film, Midnight Cowboy.

If you haven't already guessed, the album I'm referring to here is Harry Nilsson's A Little Touch of Schmilsson in the Night [....] While there are several examples of contemporary artists who have tried their hand at the gold standards - Linda Ronstadt recorded three very successful albums with Nelson Riddle in the early eighties, and Rod Stewart recently tried but failed grotesquely - Nilsson reigns supreme, adding some humor, at times, to what must surely be his most completely enjoyable album (for adults).

The sound on this album can separate the men from the boys, the Rosinantes from the Legacies, or the tubes from the transistors, if you will. It seems to me that any song on it can best another of my all-time favorite reference tracks, "Corcovado" from Getz/Gilberto #2, in countless ways. It offers some of the most astonishing vocal transparency I've ever heard in a recording, but I'll confess here and now that on some other high-cost systems that have spun this disk, the magic just didn't come through.

There's more to the sound than just the utter transparency of Nilsson's voice (but that alone would be enough to rate it a perfect 10 for sound). Stick this one on your player to test your system for uncanny image specificity and a spatial expanse that will make your walls disappear--that is, if you've developed your audio system's ability to do its thing with finesse instead of an in-your-face sense of machismo. It'll help too if you've honed your listening skills to avoid the traps and pitfalls that many audiophiles fall into with regularity. Sure, there's a good bit of dynamics on it, but it's the micro-dynamics here and there that will put a smile on the face of a seasoned audiophile, and then some. This one's all about the little subtleties that distinguish the good from the great. Note that this is not the standard version of the album produced domestically, nor is it the Australian release that was renamed, As Time Goes By. This is the British import available online from any number of sources (try Amazon).[1]