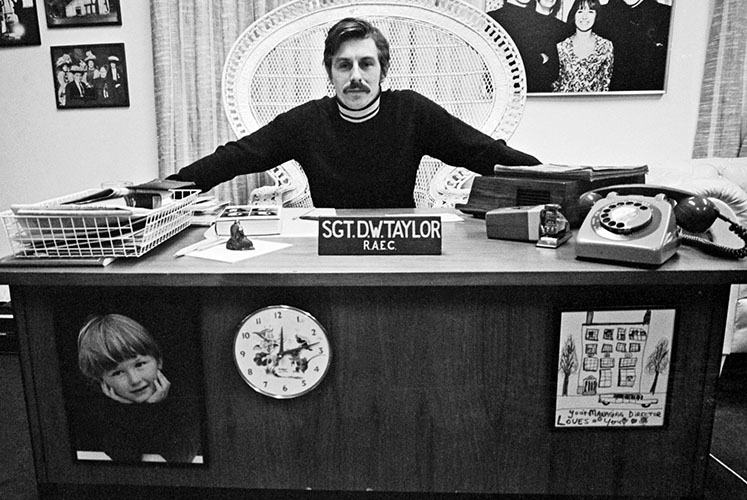 On September 8, 1997, Harry Nilsson's friend Derek Taylor died at his home in Suffolk, England, after a long illness. He was 65.

Derek Taylor was born in Liverpool, England on May 7, 1932. He was educated in the city and became a journalist for "The Hoylake and West Kirby Advertiser" before joining "The Liverpool Daily Post & Echo." In 1962, he became the show business correspondent for the northern edition of "The Daily Express," based in Manchester, England.

In 1958 he married Joan Doughty in Bebington, England.

On May 30th, 1963, Derek covered The Beatles's concert at The Manchester Odeon. In his review in "the Daily Express" the next day he wrote: "The Liverpool Sound came to Manchester last night, and I thought it was magnificent. . . The spectacle of these fresh, cheeky, sharp, young entertainers in apposition to the shiny-eyed teenage idolaters is as good as a rejuvenating drug for the jaded adult."

Following a number of subsequent exclusive interviews and reports on The Beatles, Derek developed a close relationship with the group, ghosting a weekly column by George Harrison for the "Express," and then ghosting Brian Epstein's biography, "A Cellarful Of Noise."

In April 1964, Derek became Brian Epstein's personal assistant and scriptwriter and The Beatles's Press Officer. He traveled with The Beatles on their world tour of 1964, and then resigned and moved to California, where - as a publicist - he represented The Byrds, The Beach Boys, Captain Beefheart, Paul Revere and The Raiders and co-founded the Monterey International Pop Music Festival of 1967.

As publicist for A&M Records, one of Derek's brainstorms in October, 1967 was to send a copy of the just-released Phil Ochs album Pleasures of the Harbor to president Lyndon Johnson (one of Ochs' more frequent targets, and lampooned in the song "Miranda" which appears on that album). A few days later, Taylor received a note from LBJ's personal secretary thanking him for his "kindness" in sending the album. A&M used the note as a graphic for ads for the album in underground newspapers for the next month.

It was in California in 1967 that Derek Taylor first met Harry Nilsson. Taylor described the events leading up to the meeting:

Slanted-patterned parking lot and the children in the cars of many colors were whining 'Why' and 'When' and stout and bouncing bobbing frozen-food-faced ladies in wobble-pink capris were roller-curling their basket-way to the fat and hungry Riviera trunks and we, store-sullen men, waited in the scorching smog-stained sun on various vinyl-shining seats when I button-pushed into a 17-bar song-snatch and Timothy, eight and bright, said, 'Oh, you're smiling now, why? Oh why? Why ... the song had said: 'He met a girl the kind of girl he'd wanted all his life. She was soft and kind and good to him and he took her for his wife. They got a house not far from town and in a little while the girl had seen the doctor and she came home with a smile. And in 1961 the happy father had a son ...' Such a fragment of song it was and from whom? It was new and hardly anything is new! And how could something come so strong and sudden so swiftly to snap the sad and slumberous Safeway stupor? Hayes, who rides the discs like Joel McCrea, said, '"1941," folks.' Oh, yes, he said, '"1941," by Nilsson.' Nilsson. 'Nilsson' he said, again, and told us it was good, and that was why we smiled, Timothy, we smiled because it was good ...

Derek tracked Harry down and met him at the bar of the La Brea Inn in Los Angeles, California. He also bought a case of Harry's Pandemonium Shadow Show album and mailed the LPs to his friends ... including The Beatles.

Derek brought Harry to the attention of Nat Weiss at the Beatles' management company, NEMS. NEMS attempted to lure Nilsson from RCA, but during negotiations Brian Epstein died and the offer was apparently forgotten.

In 1968, with the institution of Apple Corps, Derek returned to England with his wife Joan and their children to become The Beatles' Press Officer, casually establishing his legendary press "salon" at the Apple building in Saville Row, from where he befriended all comers and addressed the world.

With the break-up of The Beatles in 1970 Derek joined Warner, Elektra and Atlantic Records (WEA), rising to vice-president at Warner Bros. in America by 1977. During this period, he produced albums by George Melly and John Le Mesurier as well as Harry Nilsson's A Little Touch of Schmilsson in the Night.

In 1978, he left Warner Bros. to become a writer. Derek wrote and consulted on numerous books, among them George Harrison's biography, I, Me, Mine and Michelle Phillips's California Dreamin', and his own works, including As Time Goes By and It Was Twenty Years Ago Today.

In the mid-80s, Derek returned to Apple Corps, from where he orchestrated and controlled the massively-successful launches of The Beatles Live at the BBC and, perhaps rock and roll's greatest multi-media success of all time, The Beatles Anthology.

Sir Paul McCartney paid tribute to Derek. He said: "He was a beautiful man. It's a time for tears. Words may come later."

McCartney's publicist and Derek Taylor's "Anthology" press assistant Geoff Baker commented, "Derek leaves a thousand friends. Derek was not only the World's Greatest Press Officer, he was also one of the funniest, kindest and most decent men you could have met. All who did meet him, loved him. In 1969, The Beatles sang 'and in the end, the love you take is equal to the love you make.' Derek Taylor was the proof of that equation."

Rupert Perry, Chairman of the EMI Records Group, UK & Ireland, said, "The untimely death of Derek Taylor is a sad loss for our industry and especially for those of us at EMI privileged to have known him. During his years holding the outside world together during the crazy days of Apple at 3 Saville Row, and more recently as the constant voice of sanity and reason amidst the furor of The Beatles' 'new' recordings and reunions, Derek's calmness and infinite charm and wisdom cooled many a hot head. Despite his illness, Derek continued to provide support to The Beatles, Apple and EMI, and we will remember him with great affection and gratitude."

Derek Taylor wrote more words ... and wrote more passionately ... about Harry Nilsson's music than anyone else. He had a wonderful way with words. Unfortunately, I am not as talented as Mr. Taylor, so I borrowed most of the above from Derek's official biography as released by Apple. -- Roger Smith

Derek's poetry was exceptional and I wish I could recall the jaggedy little poem he wrote about southern California shopping center parking lots that Harry Nilsson used to recite with such relish and exquisite attention to detail. Now there was a pair, Harry and Derek. They were dark-side-of-the-moon twins, those two. And what a delicious tiny little private victory of my own life to have been allowed to sit between those two men and watch the cosmic gears grind while the stars flashed overhead. They must be together, if there is any order in the Cosmos. They must have staked out a tidy little pub somewhere over on the east side of Paradise, and they must be sitting there now laughing, not in an unkind way, about my pathetic efforts to describe how dear this fellow was. How dry his wit, how deliciously deep his soul, and how impeccable and unswerving his honesty, his honor, his love for his family, his turn of phrase, his wry smile, his unexpected noble gesture. -- Jimmy Webb

Derek has been one of the great influences on my life. I've had others. Lenny Bruce - I used to memorize all his routines. Ray Charles, whose Newport 1958 is one of the classic recordings of all time. Also, the Everly Brothers, Little Richard, and, of course, Elvis. ... [Derek] is a brilliant man; the most brilliant man I've ever met. -- Harry Nilsson