Roger Smith interviewed Zak Nilsson for this article which was originally published in the July, 1996, issue of Everybody's Talkin'.

ET caught up with Zak Nilsson somewhere in Cyberspace where this interview was conducted over a period of a few weeks. Many of the questions were suggested by readers of the NilssonWeb mailing list. 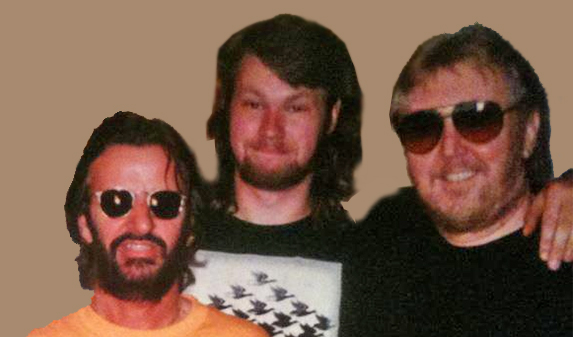 Zak with his Father and a Friend

ET: If this were a Playboy interview (yeah, I buy it for the interviews!), there would be a introduction where I talk about meeting you under some strange circumstances then I'd give a little background biographical information about you. So, I'll start there. Who the hell are you? Oops, Sorry ...

ZN: What the...?! Oh yeah. Well, I'm Zak Nilsson, I'm now 25 and living in New Hampshire. I'm Harry's oldest son and sibling to six other little Nilssons. I like to call myself a musician in most of my spare time, but I can't really sing - that was Harry's gift. I work for a graphic design/print/copy shop as the systems manager and prepress specialist and I enjoy Mexican food more than anybody should enjoy food. I think that's most of it...

ET: Your mother and Harry divorced when you were very young. Did you have much contact with Harry as you were growing up?

ZN: Not what I would call "a lot", but after my mother and I moved to Santa Cruz when I was four or five, I would fly down to visit him two or three times a year. Sometimes the visits were one week long, sometimes two weeks. I don't really remember, but my aunt told me that I flew down often enough for the stewardesses to recognize me on sight and keep me out of trouble until Harry came to pick me up. But when I did visit, we were always doing things together. Sometimes I would go to a studio with him while he was working on a project, sometimes we would go to meet friends of his; I always had a great time and I was always sad when I had to leave. I suppose for not having all that much contact, we did have a lot of what I would call quality time when we were together.

ET: And you're close to Beau and the other Nilsson offspring ...

ET: Harry credits his mother and an uncle with inspiring him musically. Did Harry inspire your interest in music or was there someone else close to you that did?

ZN: Yes, he said his uncle taught him everything he knew about breath control. I think Harry did inspire my interest in music; I've always enjoyed playing piano, I used to play "Without You" all the time. I used to listen to Harry's albums as I was growing up; I really liked his music and I always wanted to be able to create music like that. I think that's what got me started on it.

ET: It seems a little funny that you like your father's music, because children never like the music that their parents like. But then the music Harry created wasn't necessary the music he listened to. So maybe it isn't so funny.

ZN: He did enjoy listening to his own music now and then - for example, when I was out there in Summer '93, he couldn't wait to play me the tape of Daddy's Got a Brown New Robe; he was always very proud of what he had accomplished, and I know he liked all the "standards" from A Little Touch of Schmilsson in the Night especially.

ET: Do you recall when you first realized that your father's job was different than most father's?

ZN: I'm not all that sure; I always knew he sang and wrote songs and had a bunch of records, but I didn't realize until I was older what a talent he had for songwriting and vocalizing. To answer your question specifically, I guess I must have been 6 or 7 when I realized not everybody got to go into the studio all the time.

ET: That brings up an easy question, what's your favorite Harry Nilsson album and song?

ZN: You call that easy? Yeesh... man, I love most of them. I really like "Without Her" and "Daddy's Song" and "Don't Leave Me." My favorite album may just be Aerial Pandemonium Ballet, although I really can't choose a favorite.

ET: And what other music artists do you enjoy?

ZN: Some of my favorite other groups/solo artists are Level 42, The Police/Sting, Thomas Dolby, Peter Gabriel, Howard Jones, The Fixx, Tears for Fears, and Bela Fleck. Those are just my absolute favorites; I really enjoy a wide range of music.

ET: Okay ... a couple of very serious questions from the peanut gallery. Do you like to wear bathrobes? Do you own a brown one?

ZN: I like bathrobes, but mine's green. However, I do have a promotional cape from the Son of Dracula movie ...

ET: What do you think of your pictures on the Son of Schmilsson and Duit on Mon Dei covers? Isn't "Zachary" mentioned on the Aerial Ballet cover? (That would be a little before your time, though.)

ZN: Well, that's what I looked like back then; It's always fun to show people the cover and tell them it's me. Zachary was mentioned on the Aerial Ballet cover, but I'm still in the dark as to whether it had anything to do with me or not.

ET: Your web page shows some photos of your room painted with scenes from The Point!, can you tell us a little about that?

ZN: Well from what my mother tells me, Harry was so excited when I was born that he rushed home from the hospital and just started painting the walls of my room with scenes from The Point. He covered all the walls and some of the ceiling - it was great!

ET: What gift from your father do you remember or cherish the most?

ZN: I think that would have to be a copy of Watership Down he bought for me at an airport. He drew a little picture of a bunny and wrote me a note on the inside cover; it has a lot of sentimental value.

ET: Do you think you ever gave Harry an idea for a song or inspired a song of his?

ZN: I honestly don't know. I suppose it's possible but I really have no idea. I did send Harry a song I'd written on tape once, and he wrote lyrics for it, recorded the vocals on top and sent it back. That was pretty cool.

ET: Harry had a reputation for having a good sense of humor. Do you have a particular memory of something funny he did or said?

ZN: Not any one thing in particular really, I remember him as always having something funny to say. I'd say that reputation was probably well-deserved. I do actually remember one joke he told me that for some reason stands out in my mind, but I probably shouldn't repeat it here. (off the record) It went like this: 'What's the difference between a saloon and an elephant's fart? One is a bar room, the other's a BAROOOOM!' Crude I know, but that was a little bit of Harry. he had a bunch of silly jokes like that. I just didn't really think you'd want to put that one into the newsletter, but you're welcome to if you feel it's appropriate! 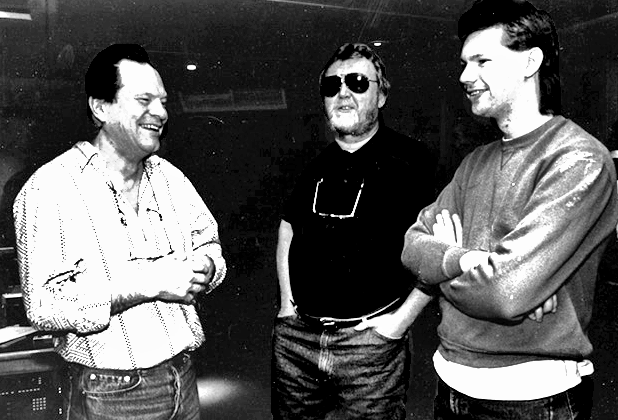 Terry Gilliam, Harry, and Zak in the Abbey Road Studios at the recording session for "How About You" for The Fisher King

ET: Sue Schnelzer wrote this to me a while back, "In 1994, during the baseball strike, I saw a PBS special about the Brooklyn Dodgers and the events that caused them to move to Los Angeles in 1958. I always wondered if Harry felt a certain kinship with the team because this was about the same time that Harry was moving from Brooklyn to Los Angeles. One of the songs written by Harry that was mentioned in the L.A. Magazine article was 'Yo Dodger Blue, LA Loves You.'" So, was Harry a Dodger fan? Did he ever take you to a ball game when you visited with him?

ZN: Yeah, I think we went to a Dodgers game in L.A. a looooong time ago. And you nailed it right on the head, Sue; Harry loved the Brooklyn Dodgers. When he died, I received his prized Brooklyn Dodgers jacket.

ET: What did he like on his hotdog? I would guess he was mustard and onions guy ....

ZN: That one I can't answer for you. I just don't know.

ET: There's a 7-Up can in Harry's refrigerator on the back cover of Nilsson Schmilsson. Did he have a fondness for the "uncola?"

ZN: No, I don't think Harry was that much of a soda fanatic. But, Harry loved numbers so much ("One") that he originally made my middle name "Seven." Here's the story. When I was born, the date was 1/17/71 and I weighed 7 lbs, 7 oz, (although I don't think it was seven o'clock). That's a lot of sevens, Harry thought, and proceeded to give me the middle name of Seven - only to find out my mother didn't like it so he changed it to "Nine," which I guess was acceptable. I like it. And there you have it, the non-carbonated origin of my middle name.

ET: Well, I can only think of one appropriate question to end this conversation - what happens to the boy when the circus comes to town?

ZN: Huh. You'd think by now that I'd have an answer to that one...Maybe for me the circus just hasn't come to town yet. But when it does, I'll be sure to let you know...