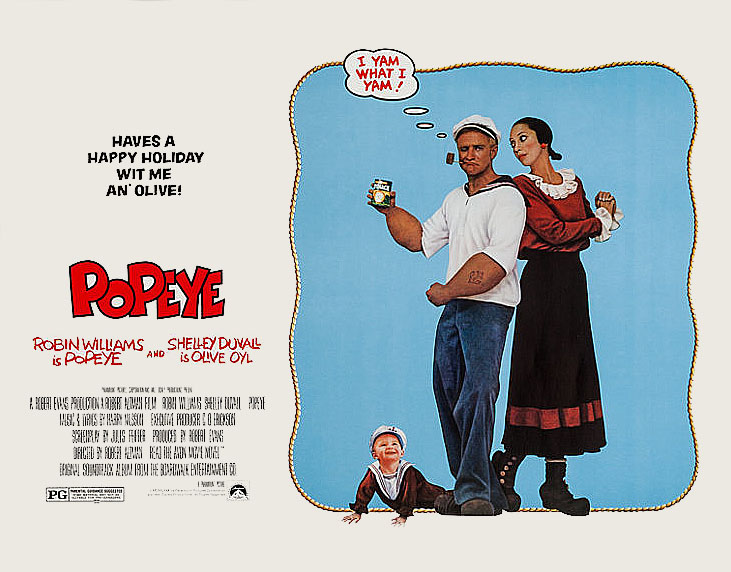 "Popeye" is a live action film which features Robin Williams and Shelley Duvall as Popeye and Olive Oyl. In the film, everyone's favorite spinach-eating sailor (although he hates spinach at the start of this film) falls for Olive Oyl and battles his arch-rival Bluto.

Near the end of the 1970s, Producer Robert Evans commissioned screenwriter (and political cartoonist, novelist, and playwright) Jules Feiffer to write a script for a live action version of "Popeye."[1] The script was passed from one director to another (including Hal Ashby, Arthur Penn and Mike Nichols) before Robert Altman ("M*A*S*H", "Nashville") ended up heading the project. At one point Dustin Hoffman and Lily Tomlin were signed on as Popeye and Olive.[2]

Altman took the cast and crew to Anchor Bay on the island of Malta. Over 100 men worked seven months to construct the Popeye set. Wood had to be imported from Canada. When they finished, the fictional village of Sweethaven consisted of nineteen buildings including a hotel, a school-house, a store, a post office, a church, and, of course, a tavern.

The film's score and songs are by Harry Nilsson. "Nobody wanted him at first except Robin Williams. Everyone said 'You'll get in trouble with him -- he'll get drunk; he won't do it; he's all washed up.' As a matter of fact I said all of those things about Harry to Robin myself one day. Then I went home and thought about it and said to myself, 'Jesus, that's what some people are saying about me!' So I called Harry Nilsson, because I had never met him in my life, and we got along terrifically." -- Robert Altman.

The climatic octopus fight was filmed in Fifla. The Sweethaven set still stands in Anchor Bay as a tourist attraction.

The soundtrack album was engineered by Rick Riccio and Mike Hatcher. Harry Nilsson wrote all of the songs except for "I'm Popeye the Sailor Man". The album was released on LP and may have been briefly available as a CD in Europe.

The New Jersey group Guitari incorporated samples of I Yam What I Yam, Sailin', and It's Not Easy Being Me, from the Popeye soundtrack album in their songs "Hero" and "I Yam What I Yam (Popeye Rap)."

I lived in the panhandle of Florida in 1979 when we heard that Popeye might be filmed near us. Any Hollywood film coming to the mostly-rural area would have a major event, but this was especially exciting news because we had already heard that Robin Williams was playing Popeye. At the time, Williams was hugely popular as the star of "Mork and Mindy."

We read in the local paper that the filmmakers were looking at an area in Valparaiso, Florida, close to the entrance to Eglin, Air Force Base. The location, on Boggy Bayou, featured large trees covered in moss which draped over the bayou and some wooden buildings that probably dated back to the 1920s.

The Florida Motion Picture and Television Council jumped the gun a bit and started collecting applications from people interested in being extras in the movie which took the excitement level up to 11. Then we heard that the filmmakers had decided to produce this film on the island of Malta (one local paper said that Malta is in the Caribbean!).

After seeing the film and reading the stories about how difficult and expensive it was to build the sets on Malta, I can't help thinking that Popeye might have been a better film if it had been made in Florida.