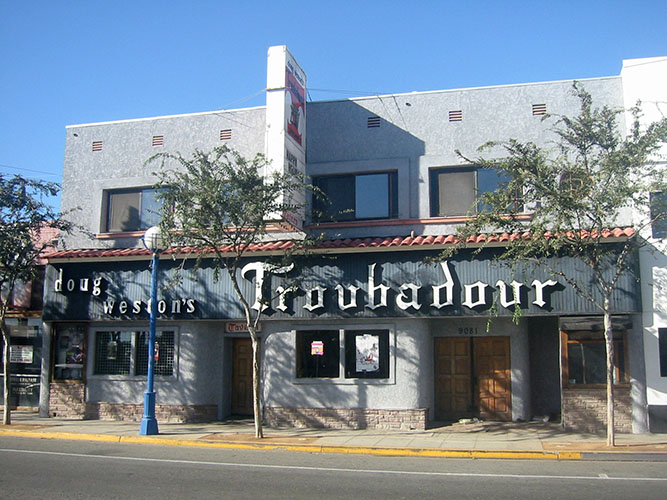 On March 12, 1974, Harry Nilsson and John Lennon were escorted out of the Troubadour club in Hollywood, California, because they were heckling the Smothers Brothers during the comedy/music duo's "comeback" performance.

Harry Nilsson said the incident "ruined my reputation for 10 years. Get one Beatle drunk and look what happens!"[1]

"It still haunts me," he continued. "People think I'm an asshole and a mean guy. They still think I'm a rowdy bum from the '70s who happened to get drunk with John Lennon, that's all. I drank because they did. I just introduced John and Ringo to Brandy Alexanders, that was my problem." -- Harry Nilsson[2]

"[...] when you're hanging out with Harry Nilsson or Jesse Ed Davis it could become a difficult situation. They were very strong figures and they loved drinking and doing other things. The newspaper is not going to sell as well with Harry Nilsson, especially when you've got John Lennon sitting next to you! You know, we've gone out, John and myself, and had a couple of glasses of wine - but you don't hear about that because nothing happened. It's when he hung out with the guys on only two occasions when it got a bit rowdy. But they take those two incidents and make it appear that this was John for the whole time." -- May Pang (2005)[3]

Lennon was creating so much, chaos that no one could stand it. Peter Lawford was sitting just behind Lennon, Peter told Lennon to shut up or get out. Lawford was with a beautiful girl: If you find out her name, get her number and let me know.

Finally the Smothers manager, Ken Fritz, asked Lennon to stop. John got up and took a swing at Fritz. Fritz swung back. Lennon then picked up a glass and threw It, missing Fritz, but hitting a waitress and overturning a table In the melee. At last, the Troubadour staff got Lennon out. But when a 51-year-old Hollywood matron took a photo of the ouster, Lennon reportedly swung at her. That was at 12:20 a.m. At 4 a.m., the woman entered West Hollywood's sheriff's station and filed a citizen's complaint against the ex-Beatle. The charge is battery: As of this writing, the authorities haven't picked Lennon up.[5]

That was in '74 and my brother and I had just started working [after] a couple of years. We were ready to come back and play our first appearance at the Troubadour in many, many years -- actually, since the television show went off the air.

So, it was opening night and, I mean, it was a huge Hollywood opening. During our first set I heard someone yelling about pigs. It was fairly disgusting. It came from an area that was kind of the elite, raised area.

The Smothers Brothers have slow timing. I work kind of slow -- not the rapid-fire, Robin Williams type of comedian. And I kept looking over, and every time I'd take a timing break, it [the heckling] would come in. I couldn't figure out who it was. I knew Harry was there and I know how Harry Nilsson gets because I've been out with him when we've been a little crazy. And I knew Lennon was there, but I didn't know who was doing it.

The heckling got so bad that all of a sudden -- I couldn't see very well from the stage -- but our show was going downhill rapidly. No one cared it was just a happening anyway, but there was a scuffle going on and we stopped the show.

My wife, who I had just married, ended up with Lennon's glasses because of the punches that were thrown. The he went outside 'cause he was still angry and kicked the car parker. I was pissed off because here was Lennon, a pretty good friend of mine, and Harry Nilsson was a close -- I mean we were very tight and had great respect for each other, but they were tuned up pretty good and drinking brandy.

Harry was very persistent saying, 'Tommy, I didn't do anything.' 'I know you, Harry,' I said. 'You were whispering to John to yell out those things.' And he says, 'I didn't whisper it -- I just made the suggestion.'

I forget how it came about, but he denied having anything to do with it. But I knew he did. He admitted it later.

Flowers came the next day, apologizing. Those things happen. I looked at it then as the way I still do now. The Beatles weren't performing or recording anymore. Harry Nilsson was working on other things and wasn't recording a lot. And, when you're that high-energy and that creative, and you don't have a job to focus on, it comes out somewhere. It's either in someone else's performance or jumping in.

It was another one of our highlights. A lot of our career has been based on accidents. -- Tommy Smothers[6]

Remember the infamous night in 1974 when a drunken Lennon and Harry Nilsson got thrown out of the Troubadour in Los Angeles for heckling the Smothers Brothers? They asked me to provide an alibi and I had to give John's attorney a deposition saying he didn't do anything wrong. I lied through my teeth. But when a Beatle asks you for help... you help.

I sat there like a cherub and swore false testimony that I was there, and Lennon had hit nobody.

You see, there was a secret code which said that because the Beatles were such a force for good, you would do whatever they asked you to. I was so proud of myself, but the amateur psychologist in me remembers that because of his cleverness, John was a very difficult man to approach and ensured people kept their distance.

The Troubadour is located at 9081 Santa Monica Blvd. in Hollywood, California.