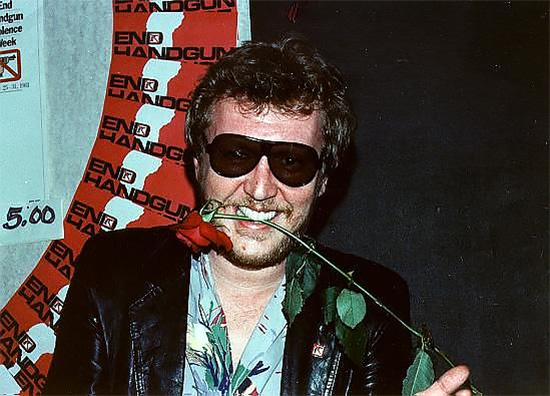 Ken Sharp interviewed Harry Nilsson in March of 1992 at the Beatlefest in Secaucus, New Jersey.

KS (Ken Sharp): What are your plans for a new record?

HN (Harry Nilsson): To make one!

KS: Have you been doing a lot of writing?

HN: Yeah. I’m starting to talk with labels now. I’ve got about nine tunes as demos and I’m showing those to a couple of key people to see what they think.

KS: You’ve been writing songs for over twenty-five years. Is it more difficult to come up with good songs?

HN: No. It’s just that I’m more selective. I think I know where the joke is and it’s harder to find sometimes. When I get to the joke I go, "Okay! Here’s one." I used to laugh at it a lot more than I do now.

KS: You’ve never gone on tour and you’ve never performed live except for a few occasions at Beatlefest. When you put out a new solo LP, will you follow it up with a tour?

HN: Yeah, if I get a record deal I definitely intend to go out and promote it with a band. I’ll tour and see what it’s like. See, most guys have already done that. They’ve blown that whole thing. I’ve still go it to look forward to.

KS: How did you come across one of your biggest hits, "Without You," which was written by Pete Ham and Tom Evans of Badfinger?

HN: I was at a friend’s house in Laurel Canyon and we were just playing records. Late at night we’re sitting on the floor and I heard this thing in the background and it said [in a heavy English accent] "You …." And, I thought it was a Lennon song. The next day I called and said "What was that song that went 'You…?' I think it's Lennon and it could be from a Beatles album." So, everybody got fifteen people looking through Beatles albums. They came back to me and said "Well, they have a lot of songs with ‘you’ in them." Then I thought, "I know. It’s by Grapefruit." And so we went through all that again. And then someone else came up with Badfinger. So, I got the album and it wasn't as good as I remembered it. It was real flat. But, I still called up my producer, Richard Perry, and said, "I think I got one here." He heard it and agreed with me so we recorded it.

KS: Did you ever get Badfinger’s opinion of your version?

HN: They loved it. Coincidentally, we were recording at Trident Studios and they happened to be down the hall. So I asked one of the engineers, "Would you do me a favor and send someone down and tell them Richard and Harry are here and we have a surprise for them." We had just finished the final mix and we had some champagne all set up. About five minutes later they came down and we dimmed the lights and turned up the volume full blast in the dark. We hit the button and they just sat there floored. They didn’t know what to say. They were really crippled by it. They knew their version and then they heard this wall-to-wall wham!

KS: Pandemonium Shadow Show is one of your most acclaimed records. What’s the significance of the cover?

HN: It was a $250 cover that the art department at RCA put together. I suggested just standing in a suit with some cut-out props thinking it would be cheap. They put all this garbage on it.

KS: What did you think of the Monkee’s version of "Cuddly Toy?"

HN: It was nice. It was nice enough for RCA to take it off my album and put it on theirs. They deleted it from my album and I think there were only 1200 copies. It’s a real collectors item. [1]

KS: How did you first come into contact with the Beatles?

HN: Derek Taylor had been playing Pandemonium Shadow Show to them. John called first and said [imitating Lennon’s voice] "Harry, you’re just fantastic, man. You’re great!" And I said, "Jeez, you’re not so bad yourself. Who is this really?" And he says "John Lennon." I said "The?" and he said "Yeah. I just called to say you’re great. That’s all." A couple of more words, and that was it. The next Monday at four in the morning, McCartney calls and says [imitating McCartney’s voice] "Hello, Harold? I just wanted to say you’re great. Derek played me your album." So, the next Monday I showered and put on a suit and waited for Ringo to call. But he didn't!

KS: There’s a tape floating around of a jam at the Record Plant in Los Angeles circa 1974 which marks the only time John Lennon and Paul McCartney played together after the Beatles’ break-up and you were there. What do you remember about that?

HN: It was the best jam I’d ever seen! They had everybody. It was like rock ‘n’ roll heaven, only they were all alive and they were all in the room. When Stevie Wonder came in, I relinquished the organ and just said I’d sing with the girls.

KS: What songs were played?

HN: The one that’s gonna come out is called "Cookin' in the Kitchen." There were so many people there that you might as well say everyone was there. Jesse Ed Davis, Bobby Keyes. I don’t remember John and Paul singing together. I remember John producing and Mick Jagger singing.