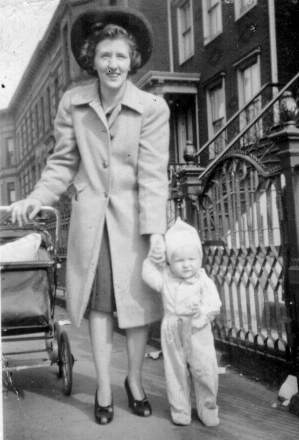 Harry Nilsson's mother Elizabeth Nilsson (born "Elizabeth Martin") was known as "Bette" to the family. She was born in 1920 in New York to Charles Augustus Martin and Florence Madeline Martin (nee Stotz). She had one brother, John, and a sister, Mary ("Cissy").[1]

Bette died on November 21, 1979. At the time she resided in the Los Angeles, California, area and ran a small antiques store.[3]

The photo[4] was taken on Monroe Street in the Bedford Stuyvesant section of Brooklyn, New York. [5]