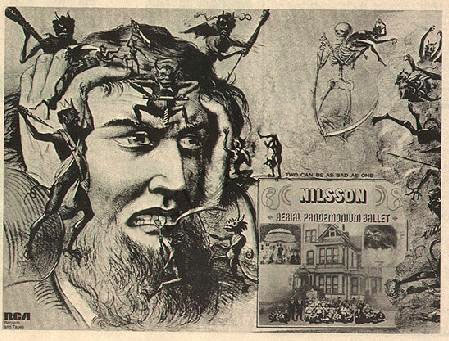 To capitalize on the success of "Everybody's Talkin'" which became a big hit after it appeared in Midnight Cowboy, Harry Nilsson remixed selected tracks from his first two RCA albums, Pandemonium Shadow Show and Aerial Ballet and released them as a new album. Aerial Pandemonium Ballet is considered one of the first "remix" albums.

The bizarre magazine advertisement for Aerial Pandemonium Ballet is based on an 1863 ad poster for "Wolcott's Instant Pain Annihilator."[1]