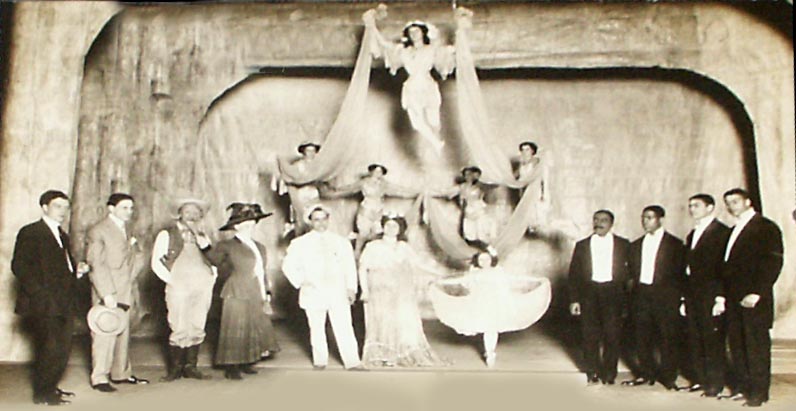 Using a device patented by Carl Nilsson, ballet performers appeared to dance in mid-air while other dancers performed on the stage below. Special lighting effects were also a feature of the performance.

Nilsson's Aerial Ballet's first presentation in the US was on September 10, 1894, in New York.[2] Newspapers from that time reported, variously, that the show had premiered earlier at the Casino de Paris ... and at the Olympia in Paris, France ... and that it was based on shows popular in Europe.

This ballet differs from other performances of same kind in that the premiere danseuse and six of the principle dancers, go through their evolutions in the air, being suspended and moved by means of very fine wires invisible to the audience.[3]

The first performance took place at Koster and Bial's Music Hall[4] at Broadway and Thirty-Fourth Street (where Macy's is currently located). 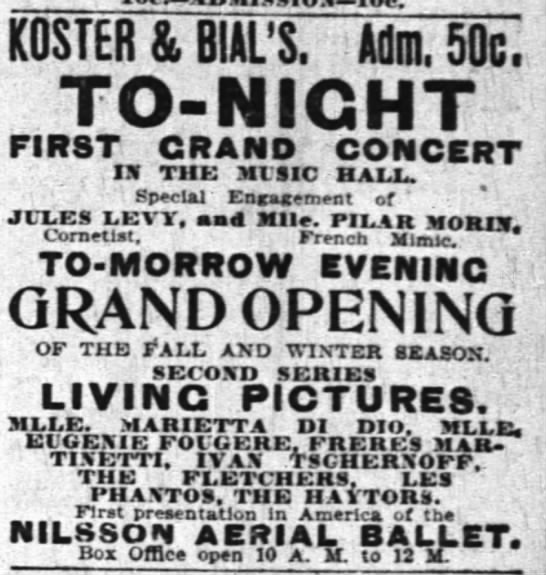 Shortly after the show opened, Nilsson filed a lawsuit in the Courts of Common Pleas in Philadelphia, Pennsylvania, against Alexander Davidson and Sherman Brown, trading as the American Travesty Company, for an alleged breach of contract. Nilsson said that on June 30, 1894, while he was in London, he entered into a contract with the defendants to sell them two ballets called the "Chameleon Dance" and "Aerial Ballet" consisting of apparatus for flying five women in mid-air with all the business, poses, and movements thereof. He said that the contract also specified that Nilsson was to furnish the cable, tackle and lenses fitted for calcium and electric purposes as well as five dozen views for lanterns and slides of mixed colors. Nilsson was also to instruct the workmen employed by the defendants and was to have received $500 upon signing of the contract. Nilsson alleges that although he signed the contract, furnished the apparatus, and had always been willing to instruct the employees, he had not received any payment.[5]

The show played in the Fourteenth Street Theater as part of a production called "The Brownies."[6]

An elaborate addition was made in the Fourteenth Street Theatre Thursday night to the beautiful transformation scene which closes Palmer Cox's 'Brownies.'

It was the introduction of the aerial ballet which attracted considerable attention in Paris last Winter. Just before the end of the play last night in the mines of Dragonfels, the stage was darkened and in obedience to the call of Euphrosyne, the Goddess of Mirth, five human butterflies came floating in on the stage. By the manipulation of ingeniously arranged stereopticons and electricity, the most gorgeous colors were thrown upon these flying fairies, who really looked as if they were winging it through the air. During this episode, and while the stage was in darkness, except for the lighted figures, the scenes changed, and when the lights suddenly turned on it was found that the mines had melted away into the glorious transformation scene symbolic of a night in Brownieland, and five other fays were floating about in midair. The whole effect was startling and beautiful. [7]

A later booking at the Court-Street Theater in Buffalo, New York, was delayed when "several of the young women who were engaged in the ballet deserted Mr. Nilsson."[8]

In April of 1895, Aerial Ballet was performed at Pope's Theater in St. Louis, Missouri.[9]

In September of 1895, an ad for "Neilson's Aerial Ballet" at B. F. Keith's New Theater appeared in the Boston Globe.[10]

In late 1895, the show opened at Poli's Wonderland Theater in New Haven, Connecticut.

In February of 1896, the show opened at the Olympic Theatre in Chicago, Illinois.[11] 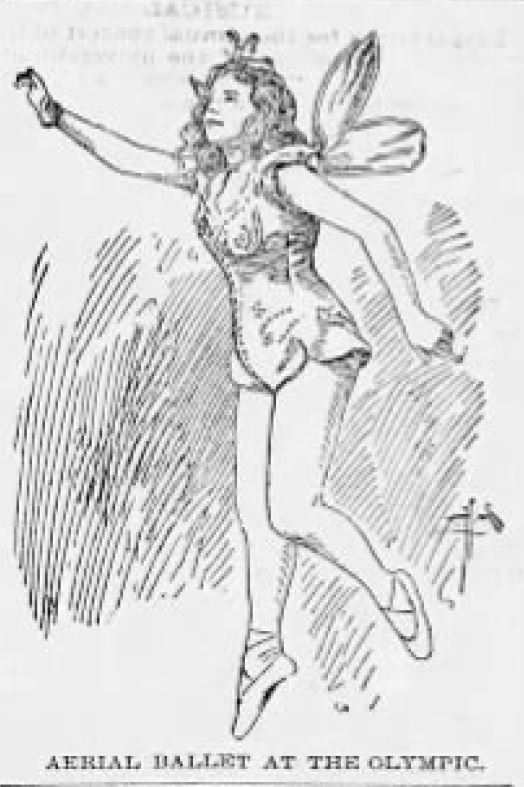 In late 1896, the Brownies show opened at the Baldwin Theatre in San Francisco, California. The show featured the same ending based on Nilsson's Aerial Ballet, but without Nilsson's involvement or permission. Nilsson insisted that it was his ballet and that he had a patent on the aerial ballet device. Palmer Cox and the Brownies Company, however, insisted that there was no patent and they could use the ballet as they wish. At the same time, Nilsson was staging his Aerial Ballet production at the Orpheum Theatre. [12]

Nilsson quickly filed suit in the United States Circuit Court. Nilsson's suit claimed that he had invented a device that allows ballet dancers to appear to move gracefully in midair and that the Al Hayman Company had a contrivance in operation at the Baldwin Theatre that infringed on his patent. Nilsson asked the court that the Al Hayman Company be permanently enjoined form using the apparatus and for $20,000 in damages and an accounting of all profits received. C. B. Jefferson, Mark Klaw, Alfred Bovier, and others were also named in the suit.[13]

Carl Nilsson's case against the managers of the Palmer Cox Brownies Company and the management of the Baldwin Theater was taken up the morning of December 23 before Judge Joseph McKenna of the United States Circuit Court on an order to show why the defendants should not be restrained from using certain patented stage machinery known as the aerial ballet apparatus.

The case was presented to Judge McKenna mostly in the form of affidavits. The affidavit of Carl Nilsson set forth that he is a mechanic and that several years prior he had patented an apparatus used for the purpose of presenting to the public a ballet-dancer who would appear to be dancing in mid-air; that is constructed of pullies, ropes, wires, etc. He asserted that all of these were surreptitiously duplicated by the defendants while in New York and have been and are being used to his detriment, causing him great loss on his patent. Substantiating Nilsson's affidavit was one by Julian Rialto, who asserted that the ballet machinery in use at the Baldwin is an exact copy of Nilsson's invention, and that it was built by the defendants and concealed in the basement of the Fourteenth Street Theater, New York. Upon presentation of these documents, Nilsson's attorney, J. J. Scribner[14] asked that the defendants be enjoined from further use of the apparatus. He said his client would give a bond for damages pending the litigation.

Attorney Fredrich[15] for the defendants asserted that he had something to present for his clients that would probably change the complexion of the case. He read affidavits of a number of theatrical people who asserted that the apparatus was in general use in theaters long before Nilsson laid claim to its origin. One was Robert J. Cutler, a machinist in the Brownie Company, who stated back in the early part of 1882 a ballet was produced in a New York theater that had a run of sixty consecutive nights in which the aerial feature was introduced. As early as 1873 he saw in Booth's Theater, New York, a production similar to that of the Brownies. The deponent asserted that he had frequently constructed similar devices for similar purposes, for the main principle was that of a moving crane, such as is used for moving hay or other heavy or bulky bodies. 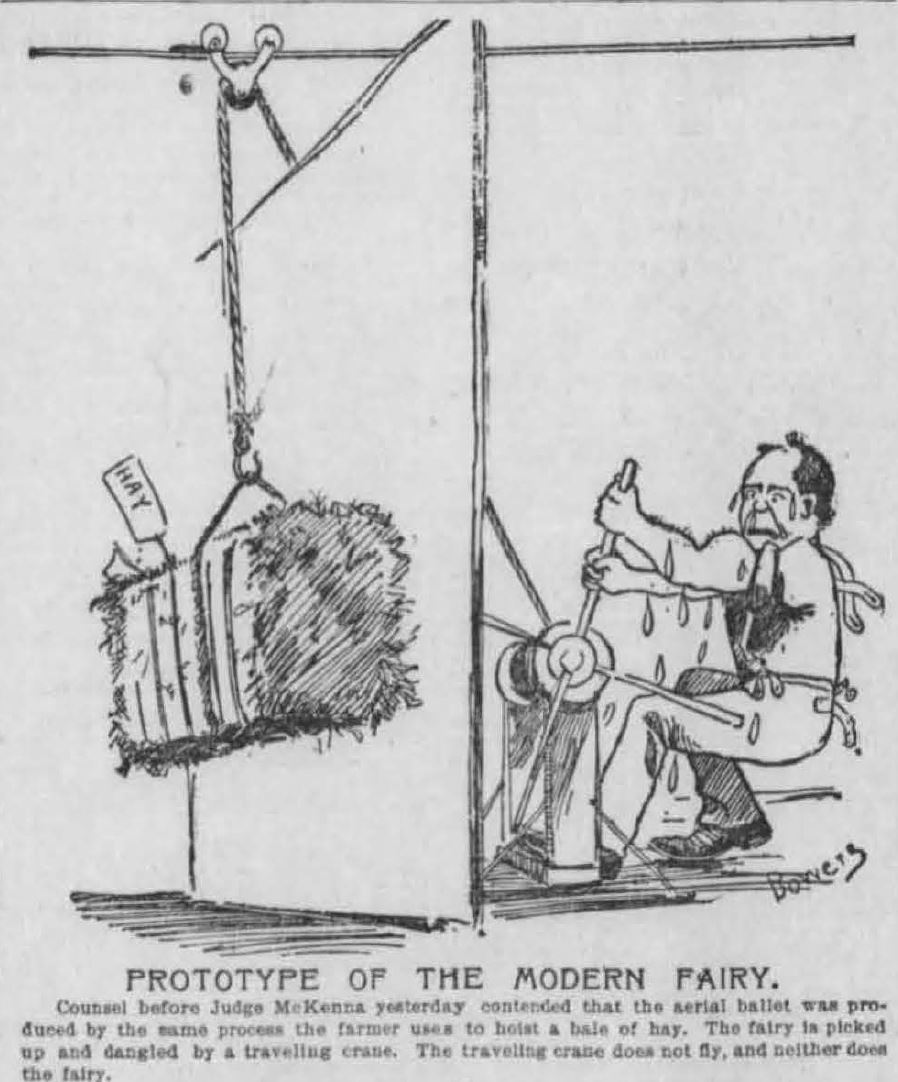 "Oh, Could I Fly, I'd Fly With Thee - How the Airy Fairy is Hoisted Aloft Like a Prosaic Bale of Hay"[16]

Malcomb Douglas, who composed the music for the Brownies and was an advance agent for the same company, stated that the company produced this attraction in all of the principle cities of the East and in Montreal, and that in some of the cities, Nilsson produced ballets simultaneously with the Brownies and both used similar apparatus. In none of those places did Nilsson attempt to enjoin the company from using the apparatus, nor did he lay claim to any patent involving the principles upon which the aerial feature was produced.

Florie Clements, of the Brownie Company, made a similar affidavit.

The affidavit of Lillian Beck, of the same company, said that she knew of the aerial ballet being used in a London theater in "The Golden Fly," and that while in New York Nilsson told her that the device was not new, as he had seen it in London and Paris years before.

The affidavit of Alfred Bouvier, manager of the Baldwin Theater, said that he is simply engaged by the Palmer Cox Company and has no interest in the litigation. He was named as one of the defendants.[17]

Skipping Christmas day and the weekend, the case continued the next Monday, December 28. Affidavits were filed in response to the previous affidavits and the plaintiffs argued for a permanent injunction against the defendants use of the aerial ballet device. [18]

On December 29, final arguments were made in the case. The defendants argued that Nilsson should have taken other actions and not have tried to stop the show by an injunction. Nilsson should have sued, they said, for damages of an adequate amount. Nilsson's attorney replied by saying that Nilsson had not granted anyone a license to use his invention, so the damages could not be estimated on that basis. Nilsson would not concede that the defendants had any right to use the invention as he wants the exclusive monopoly of his patent.[19]

On December 31, Judge McKenna made his ruling in the case. The judge refused to grant an injunction to restrain the Baldwin Theater people from using the machinery and apparatus from the aerial ballet.[20]

Within a few days of losing the court case, Carl E. Nilsson, along with attorney J. J. Scribner, Gustav Walter, J. J. Rauer, and George H. Perry, incorporated the Nilsson Aerial Ballet Company in San Francisco with an authorized capitalization of $10,000. The company was formed to purchase and control Nilsson's "Aerial Ballet" patent including licensing the device to managers and proprietors of theaters for certain rents and royalties.[21]

The "Aerial Ballet" is a decided novelty. Mr. Nilsson, the inventor, has arranged some peculiar mechanism, by means of which dancers are suspended in the air and move about at will, their costumes constantly changing under a clever calcium light arrangement. One pretty woman, robed in a flowing white dress, comes out first and does a skirt dance at the end of which she vanishes into the air. She appears again a second later and is joined by another woman and then another until only six are floating above the stage, the costumes of each undergoing many changes. One minute they are all butterflies of varied, but most gorgeous hues, another minute and the six are each robed in modern ball room gowns, a flash, and "Old Glory" covers all the forms and a hearty round of applause is given by the spectators. It is a most beautiful sight and commmands admiration for the genius of the inventor.[23]

On February 28, 1899, readers of The Ocala Evening Star (Ocala, Florida) learned that Aerial Ballet was coming to their town. 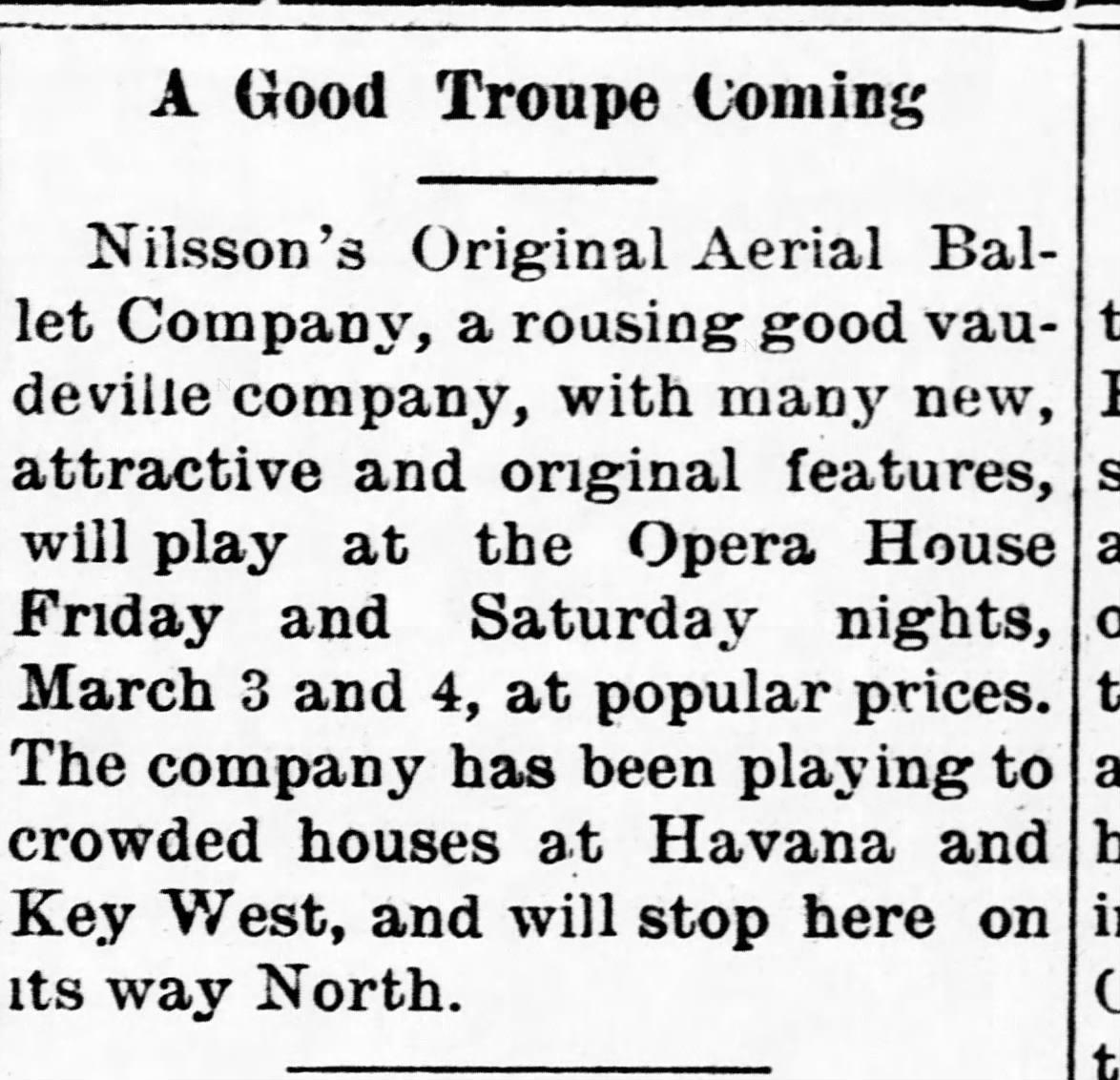 But, on March 3, 1899, a notice in the paper alerted readers that the upcoming performance of Aerial Ballet at the Opera House would be delayed. 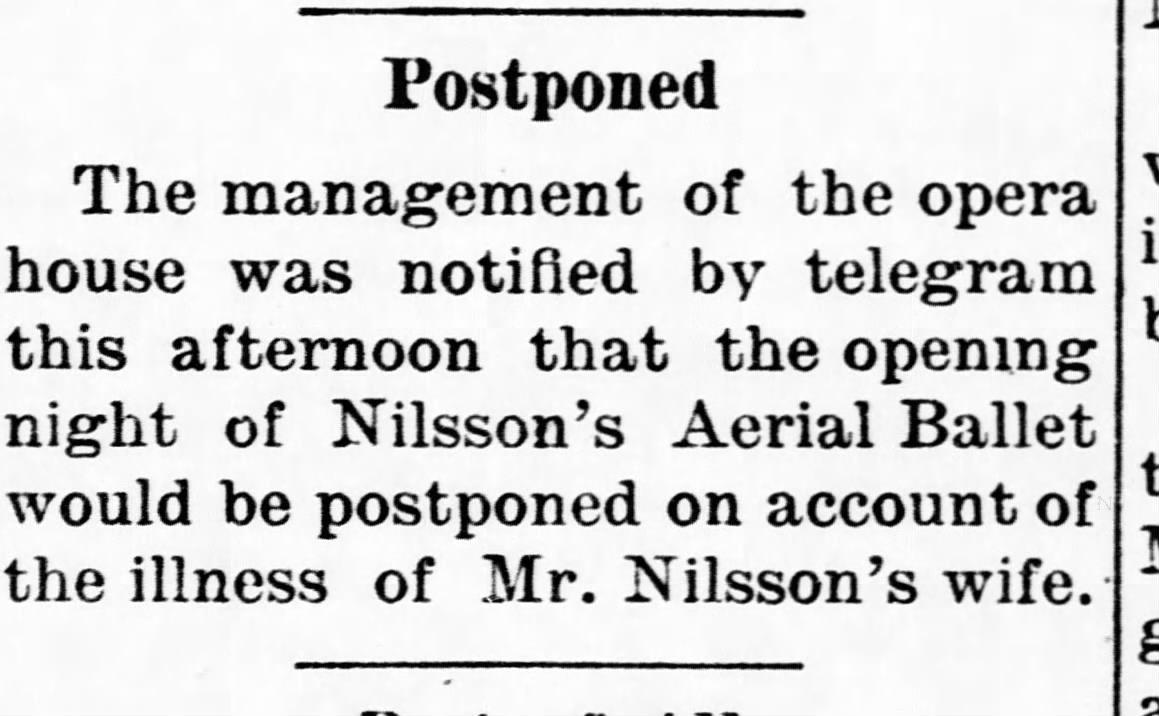 When the show finally did come to town in late March, the paper made sure that the ladies of Ocala felt welcome to attend. 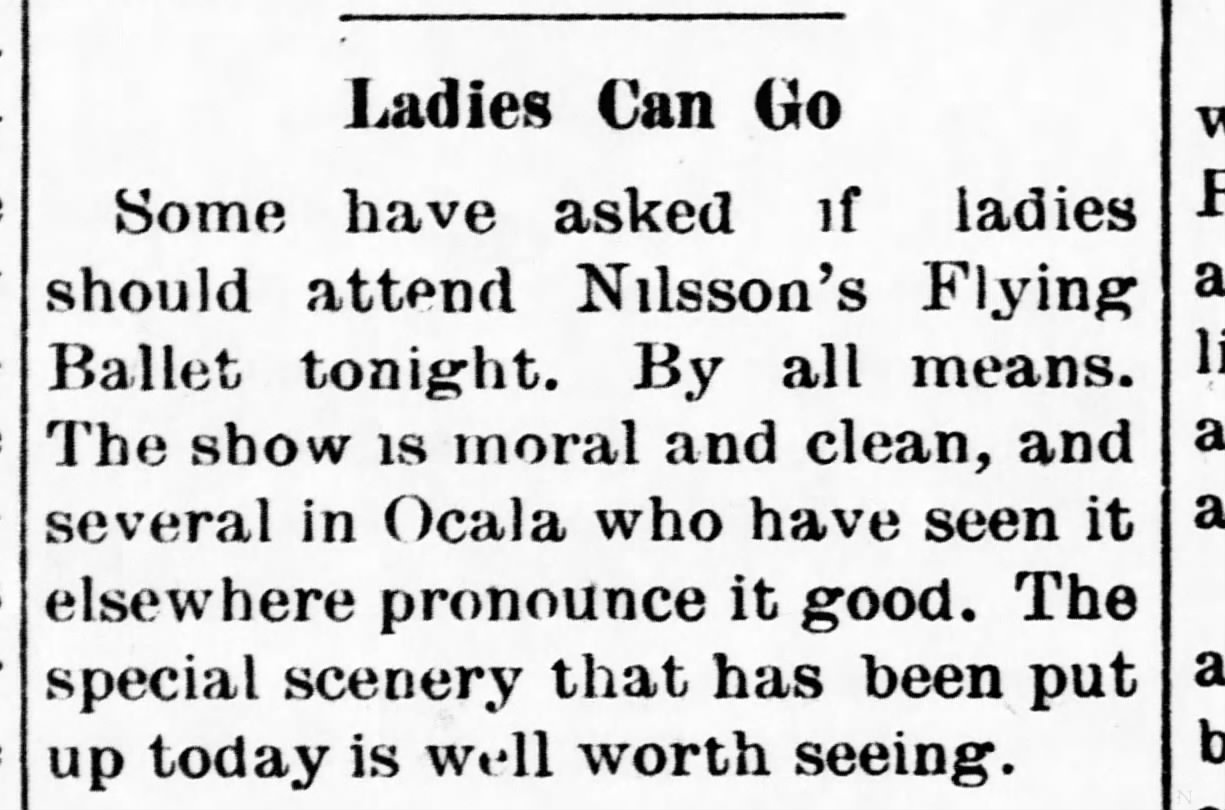 And you will be relieved to know that, according to the March 21 edition of the paper, the performance was "creditable," "clean," and "of a much higher order." 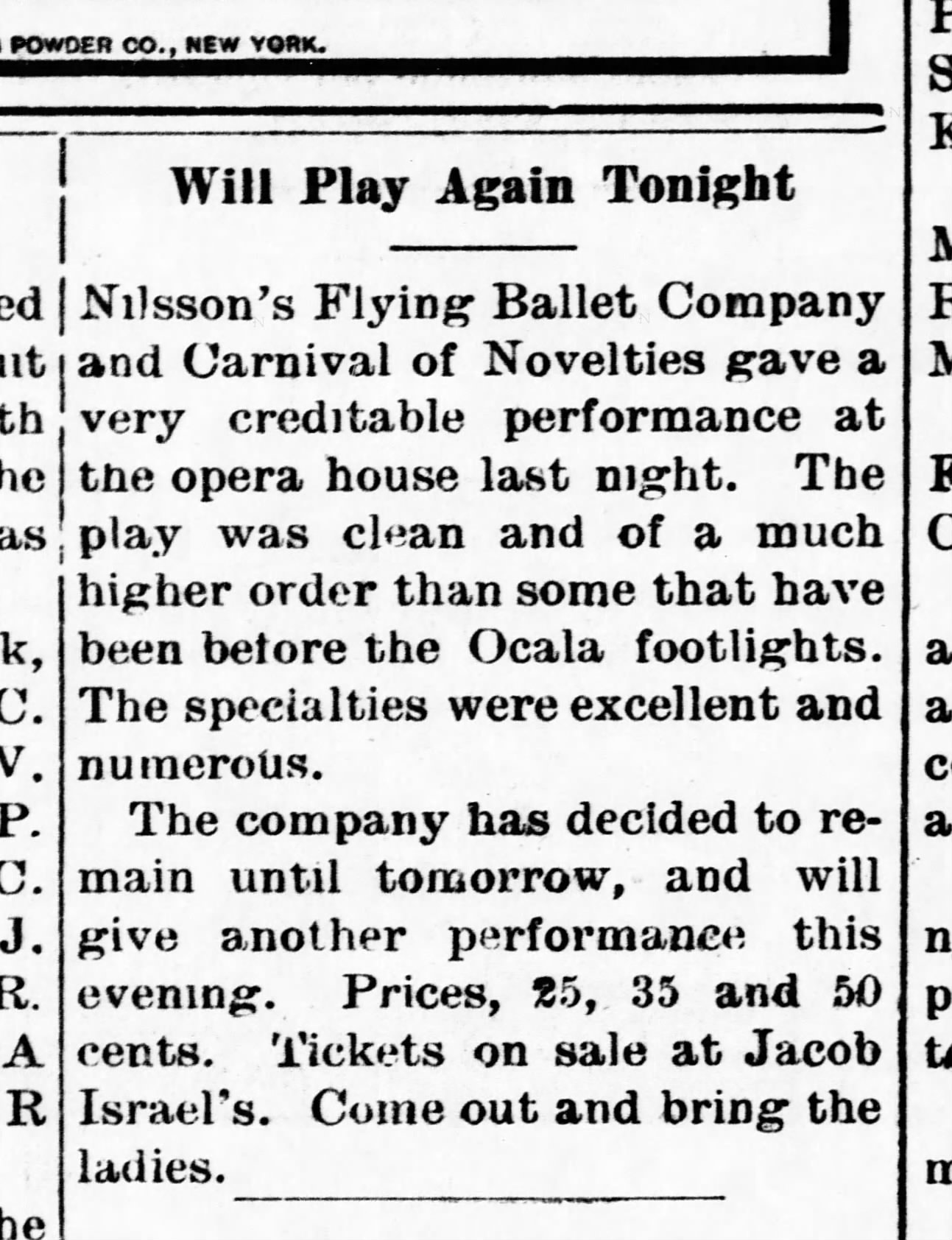 For about a decade into the 1900s (the last performance was circa 1912), Nilsson's Aerial Ballet continued to be staged around the country. Often it was called "Neilson's Aerial Ballet" or "Neilsen's Aerial Ballet." Although some of these productions may have been copycats, Carl Nilsson is mentioned in newspaper accounts as being involved with some of the Neilson/Neilsen shows. 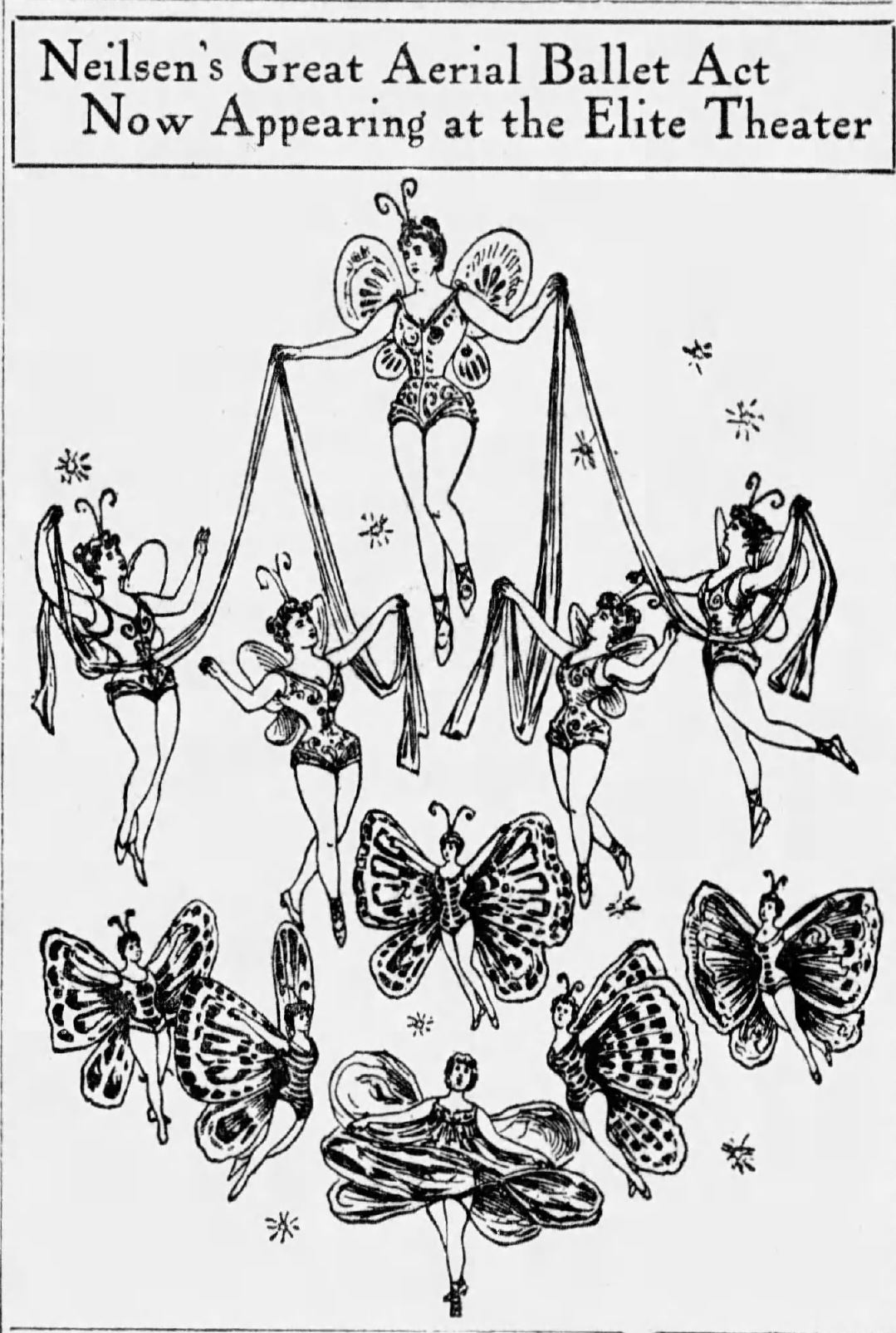 I'm not sure what to make of this clipping from The San Francisco Examiner on January 27, 1897. Is it satire, a serious article, or, maybe, an ad?

Harry Nilsson is known for never touring, but his great-grandfather certainly did. In the two decades that Nilsson's Aerial Ballet was performed, Carl Nilsson took it all over the country, from New York to California, and into Canada and Cuba.