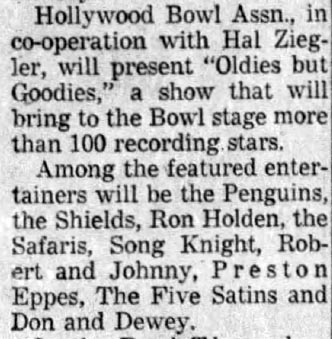 Hal Zieger (sometimes reported as "Hal Ziegler" or "Hal Ziger") was a music producer and promoter in Southern California in the 1950s and into the early 1960s. He is credited as one of the first distributors of rock music.[1]

I realize that this music got through to the youngsters because the big beat matched the great rhythms of the human body. I knew it and I knew there was nothing that anyone could do to knock that out of them. I further knew that they would carry this with them the rest of their lives.

In 1961, Zieger hired Harry Nilsson and Harry's friend, Jerry Smith, to fill in for The Safaris during one of his "oldies" shows at a venue in National City, California. The evening was not a success for the young duo and may be a factor in why Nilsson seldom performed live later. For the complete story, see the article "One Last Touch of Nilsson."

Zieger and bandleader, Johnny Otis, started a music publishing company, Eldorado Music which also released records on the Eldo label. The label produced a top ten hit with "Image of a Girl" by The Safaris.