A Toot and a Snore  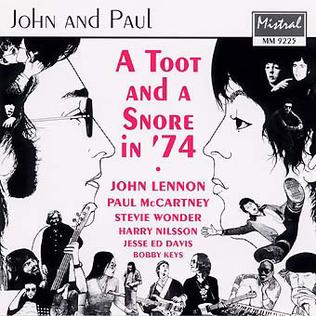 Between March and May 1974, John Lennon was at Record Plant West and Burbank Studios in Los Angeles, California, where he was producing and mixing Harry Nilsson's new album Pussy Cats. (The documented dates vary. Mark Lewisohn says the sessions ran through March 1974 (Day By Day, 1990, p.161), while John Robertson says the sessions lasted from April to May (The Art And Music Of John Lennon, 1990, p.166.)

During this project (at the height of Lennon's infamous "Lost Weekend") there were numerous drunken, late night jam sessions featuring star guests. Klaus Voormann, Keith Moon, and Ringo Starr, who were recording with Nilsson, often attended.

At one of these sessions, Lennon produced Mick Jagger singing a Detroit R&B tune "Too Many Cooks" with Jack Bruce amongst the supporting cast. On another occasion, Lennon was joined by Paul McCartney for their only recorded performance since the break-up of the Beatles.

Allen Wiener (Ultimate Recording Guide, 1992, p.237) does not mention Keyes (although Keyes is present), but suggests that Danny Kortchmar played on the session, perhaps on bass (Kortchmar played guitar with both Peter and Gordon, as well as James Taylor). The bootleg album A Toot and a Snore in '74 also credits Mal Evans with tea - and from Lennon's comments, the Beatles old roadie may very well be present.

It is also reported that May Pang witnessed the band performing "Midnight Special" (Robertson, p.167). Whether that performance was during this session, or at another session is unclear, particularly since no recording of this song has appeared on a bootleg to date. However, almost 30 minutes of music from these sessions have appeared on A Toot and a Snore in '74.

Note: Each CD track is listed with the title given on the cover, as well as  the track duration. Under each title is info on which songs are played and duration of each 'take'.

Paul is thrashing about on the drums. Someone is playing guitar. Lennon is giving instructions and helping with the conviviality.

JL: If you can get the riffs, just so we can sing something...do you want a snort Steve? A toot? Its going round...

The tape is already running, and John is singing a slow, bluesy number in his inimitable style. He is accompanied by bass, lead guitar, organ and  Paul tapping a cymbal.

JL (singing): And I fell upon my ass...nobody seemed to notice...I was wearing mother's bra...and she was wearing oh dear(?)...but no-one seemed to care, over there, they didn't have the bus fare, didn't have the bus fare, didn't have the bus fare...yeah. And later on, a distant relative passed away, so distant I didn't even notice...but I had to go to the funeral, just to see if they'd left any gold in their teeth or any jewelry. So I say - never trust a bugger with your mother, she'll always wear you out and say 'anything on paper ain't worth a dime, but I  like the suit just cut this way - ah gee, its been such a fun time. When I look at Jack Lennon, and I look again, I feel him coming all over me, he he he, yeah, I just gotta say it, Brooklyn Bridge, San Francisco Boot, Elementary Canal, Boston Strangler...its so wonderful to be waiting for my Green Card with thee...I would never doubt it, but I have to shout it, 'Chicago, Chicago, its a hell of a town, solo, play it man!...I'd like to change the tempo a little now...don't play it here, don't play it here, don't play it here,

The band comes to a halt.

In this segment, John tries to get a song they all know, and complains,  presumably to Paul, about how bad most other musicians are at being able  to jam. The track starts with Paul tapping out a slightly faster rhythm and Keyes plays a few sax notes. It soon falls into a slow paced  instrumental with drums, organ and guitar, vaguely reminiscent of  "Lucille" until John gets bored and again stops them...

JL: Alright, lets make some backing...I like both you and Bobby, but I  don't understand why you're sitting right on top of me...somebody think  of a friggin' song. I've done "Ain't That A Shame" in twenty studios on  these jam sessions...(someone says something off mike to Lennon) Yeah,  its just that we had a jam and nobody knows when to change. You do a  twelve bar, or somebody picks a song

JL: Anybody can sing...no no no, anybody know...we did "Do Ya Wanna Dance" for three fuckin' sessions.

The band starts to play a medium paced riff. They are frightfully  ragged.

JL: Anybody know it? (singing) little bitty pretty one...that's all I know...see what I mean?

Paul now gets a mike, and his comments are more audible.

JL: I've forgotten all the words...(singing) left my woman by the...that's all I know. If somebody knows a song that we all know, please say so, 'cause I've been screaming here for hours...its gotta be something done around Fifties, or no later than '63, or we ain't gonna know it...I got it, I got it!

JL: Who's got a mike besides me? Come on, somebody join in

The band, led by Stevie, pull it together and start  playing the riffs that underpin "Lucille". They play three instrumental  choruses, with saxophone, organ, lead guitar, bass and drums before John comes screaming in, aided by Paul, who provides a distinct harmony vocal. This is the only significant interaction between Paul and John throughout the session.

They sing two choruses and a middle eight before an instrumental break. dominated, initially by the sax, before a guitar takes over. They resume with another middle eight, followed two more choruses. This is followed by a ragged guitar solo from John (?). Paul's drums have been faded out of the mix at this point. Paul and John then sing a middle eight acapella, followed by another chorus and instrumental. Yet another middle eight and chorus follow, with some more instrument and vocal "drop-outs" and then another more ragged guitar led solo by John which lasts for two choruses before the band grinds to a halt(?)

JL: It is a little better, if we think it is a song, right? And somebody turn my vocal mike down...give Stevie a vocal mike...and where's all that drink they always have in this place?

Someone picks out the chords to a slow ballad. The CD lists it as  "Nightmares", but it is actually the 1961 Shadows instrumental  "Midnight." John ad-libs some lines over the tune, but is keen to do something else, trying to play the opening riff from "Sweet Little Sixteen."

However, the band keeps playing

The band tunes up.

JL: Let's do a twelve-bar harmony to "Stand By Me"

The band tries to play the riffs.

JL: OK OK OK, you get it, you get it good. OK OK...lets not get to serious, we're not getting paid...we ain't doing nothing but sitting here together...OK, lets do that, and anybody who gets bored with me, take over...two, two, two.

Led off by a guitar playing the opening riff, joined by sax, organ, bass and drums. John starts singing and gets through half a verse before stopping...

JL: What happened to the earphones? OK, lets do it again...hey, hey hey!

JL: Boys, boys, in the control room? You suddenly turned the voice off and one ear off. If you're trying to get rid of me guitar, tell me...just put it up. Just turn the friggin' vocal mike up again and put it all flat, and put one mike in the middle of the room and pick up everything! Come on Steve...hello, hello? Mal? Get us a drink.

Yet another attempt at the song, which breaks down before Lennon sings a note

JL: I'd sooner have more fun in here and forget about it in there. Its gone all sort of dead, dead in the earphones, you know, DEAD...DEAD man! Look, let's not get too serious Gary, you know...hands up who doesn't know 'Stand By Me'? Arm in the air, OK OK, then we all know it, right. Just turn the fucking vocal mike up...McCartney's doing the harmony on the drums, Stevie might get on it there, if he's got a mike...

Paul sings a few wordless yeahs in the intro. John is still unhappy with the mix, and talks to the control room as the band plays...

JL: And another one, still dead in the earphones! Alright...still a bad sound. Treble. Let's hear it!

John tries singing, with Paul echoing his lines, but John's getting angrier about the sound, and stops them after only a line.

JL: Just one ear's on now. Before it got serious I could hear everything, I can't hear a fucking thing. Hello, hello? C'mon, you know..."Darling darling, stand by me", but we can't do it with no fucking voices! I can hear plenty of bass, plenty organ, plenty guitar. I can't hear hardly any of my voice, only in one ear. What, what? Can you hear me in the control room? The mike was good two hours ago and they heard me shouting, they thought I was too loud so they turned it down. So don't worry about distortion...

JL: You don't have to change nothing, just put it back where it was...its a good mike...fuck it

John finally starts singing, joined by McCartney, who echoes John's vocal in the second part of the verse. Someone in the control room has added echo to the vocals. Half way through verse two,  John's mike is turned off, leaving only Paul singing. Of course, because Paul can still hear John singing, he keeps on adding his harmony vocals (you can vaguely hear John's vocal leaking onto Paul's). As a  result, it sounds like a karaoke version of the song with the lead vocal removed. Towards the end, Harry Nilsson also joins in the "Stand By Me" refrain.

Stevie Wonder takes the lead vocal on this track, accompanying himself on keyboards. He sings two verses of "Cupid" with assistance from Paul. They then switch to "Working On The Chain Gang" (?) with Stevie and Harry trading verses before Harry finds problems with the mikes too.

There is another verse and then a guitar solo. Paul leads them into a short version of "Take This Hammer". The track is faded out, just as the three of them start singing.

Beyond the historical significance of this recording, it has little going for it. It is little better than most of the Get Back sessions. Paul's contributions are minimal (OK, he was playing drums, so he may be excused for being less talkative), and the performances of the others are fairly ragged, particularly whoever is playing bass. Stevie Wonder's performance however, is still fairly impressive, and it is he who often keeps the others together, a bit the same way that Billy Preston managed to compensate for often shoddy playing from the Beatles during the Get Back sessions.

The problems with John's mike mean that most of the "Stand By Me" performances are useless, while Lennon himself spends almost as much time swearing at the control room as he does singing. Although John's ad-libbed songs are amusing, John and Paul's performance of "Lucille" is the only song that stands up to repeated playing. (BTW, for those of you unable to get a copy of A Toot and a Snore in '74, the performance of "Lucille" is also available on Artifacts III (Disc 2, track11).

The sound quality is very good stereo, and is only marred, as has been suggested, by various instruments and vocal tracks being mixed out by the control room.

Overall, for all of you hoping for some Beatle magic, don't hold your breath. Its only real value comes from being able to hear John and Paul together again for one last time.