|  ★ Rate This
New Nilsson Songs is a promotional album released in 1967 by Rock Music Co., the publishing company run by Perry Botkin and Gil Garfield. 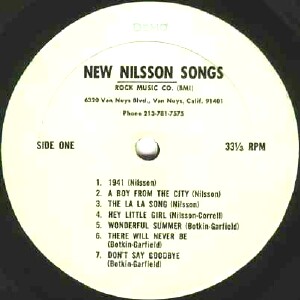 Promotional record released by Perry Botkin and Gil Garfield's publishing company to promote Harry's songs. Ten of the album's thirteen tracks were written (or co-written) by Harry Nilsson. The songs are performed by Robin Ward, Jimmy Cross, Jean King, Harry Nilsson, and others.