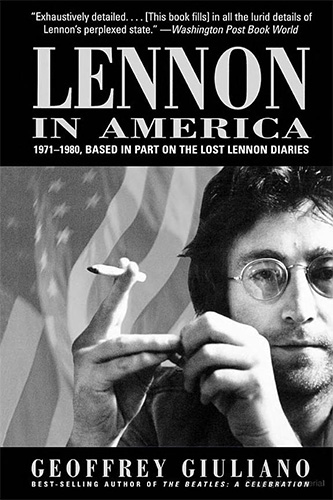 In Lennon in America author Geoffrey Giuliano makes many sensational claims about John Lennon. Giuliano claims that his primary source was a copy of John Lennon's diaries given to the author by Harry Nilsson.

I never met Harry Nilsson, but as a fan who has spent many years maintaining the Harry Nilsson Web Pages, I find it hard to believe that Harry Nilsson would have betrayed his friend by giving Giuliano anything that would harm the memory of John Lennon.

An article titled "Lennon, Imagined" published in the Buffalo News on May 28, 2000, supports my belief.[1] The article reminds us that Harry Nilsson was very talkative, yet never mentioned to anyone that he had copies of - or even had read any of - the Lennon diaries. Nor did Una Nilsson, Harry's wife, find them among his possessions after his death in 1994.

Lee Blackman, Nilsson's attorney and close friend, is quoted as saying "Harry's going to give Giuliano copies when he doesn't tell any of us?" "Harry was not going to betray a friend," Blackman added.

The Buffalo News article also questions whether the diaries even contained anything sensational. Major portions of the diaries and other references supplied by Giuliano and reviewed by a Buffalo News reporter revealed only mundane information. The reporter found that the diaries contained little to support Giuliano's wildest claims and actually refuted some of them.

Bob Rosen who transcribed the original, handwritten journals said of Giuliano's book, "I see little bits and pieces, pretty mundane stuff, that might have come from the diaries. The sensational things, I don't know where he got them from. I'm assuming he made it up, because I've never seen anything like that."

When questioned about the book's credibility, Giuliano replied "I'm clean as a whistle in the way I put the book together. '60 Minutes' couldn't have done it better.

"What is it that I don't have?" he continued, "People worship me. I sit on a throne. I'm famous. Why would I want to perpetrate fraud on anyone?"

Note: Shortly after I posted the above article on the web site, I received an email from Mr. Giuliano stating that he was going to sue me. Although I wasn't intimidated by the threat, I went back and read what I had written and did remove one line (which, on second reading, I felt was too much of a personal attack on Mr. Giuliano). And I added a link to Mr. Giuliano's rebuttal of the Buffalo News article. (The rebuttal is no longer online.) After that, Mr. Giuliano backed off on his threat to sue me.

I tried to explain to him why we, the fans of Harry Nilsson, feel that his claims are an insult to Harry's memory. He didn't seem to understand (he responded with a question - "how is telling the truth an insult?"). I got the sense that he's not living in the same universe as the rest of us.