Why We Were in Wyoming in the Hardware Store that Day  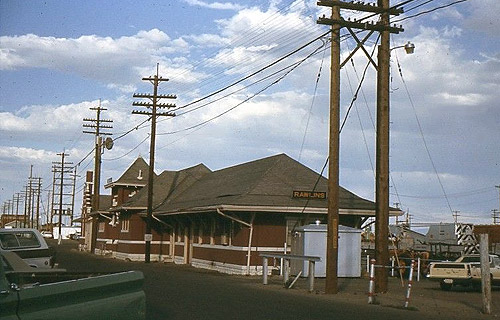 This short story by Harry Nilsson was originally published in Fishwrap, Number 2, June 1983.

"WHY WE WERE IN WYOMING IN THE HARDWARE STORE THAT DAY"

Two days after Valentine's Day at 11 AM, we decided to catch the only train leaving L.A. for Denver that day.  The "Desert Wind" is painted proudly above it's AMTRAK stripes.

"Call Nick. Get the essentials from the toilet."  Pick out two suits and some train garb - one show-off suit and one boring suit, two pair of shoes to complete the image transfer and of course, one black shirt and tie to wear with the yellow mustard double breasted suit and lizard skin shoes.  Una, by this time, had made the call to cancel lunch with Michael Macaluso and made the call to 'Cheech' Marin to open up the two seats they were holding for us at the screening of Marin's new film Still Smokin.

I was very ill - flu - walking pneumonia - something - the kind of sick that makes you aware of your body.  When things are running smoothly one isn't aware of his body and that's the way it should be.  Anyway, it was now about 11:30, maybe 11:35, and I forced my much wiser body to defend itself from the strings and arrows of outrageous shower.

Una was preparing herself and one-year old Annie for our adventure and at the same time preparing Beau and Ben, six and three, for the three-day disappearance of their parents and sister.

The only train that day for Denver left precisely at 12:40.

Union Station, a place never visited by Nick the driver 'til that day is located in the heart of downtown L.A. directly across from Olvera Street. The central map in the Flash Guide to L.A. was vague and added tension to the 35-minute trip to the station - so did the slow moving line of older people, who wisely knew enough to arrive early.

Anyway, as we settled into our small, cozy (to be kind) sleeping compartment, the train pulled silently, with ease from the station.  Now the real settling in got serious - tapes, tape recorder, batteries, radio - knowledge of the bath/shower room - which knob rotates the single seat opposite the couch/bed - which knob reclines - etc.  Does the AC 120 - "razor-only" - really mean it?  Frank, the car attendant, said "No."

It was okay to plug in a radio or tape machine.

We would arrive in Las Vegas at 7:25 with a twenty-minute layover; enough, just enough time to buy a tape recorder at a pawn shop downtown.  By this time, we had discovered that our tape machine was broken, and what with the "oldies but goodies" collection and the old radio programs (Sherlock Holmes, Lone Ranger, The Green Hornet, etc.) our hearts also were in need of a fix.

"No way," said Al the cabdriver.

"Well, what about that store over there?"

Ha!  He thought - you see, Las Vegas is a loser town, and the locals hate to see outsiders win at anything - including finding a tape machine and making the 7:45 departure - which of course, we did - after talking to six different shops.  A woman with her 18-month old son overruled the fifth person and told me there was a pawn shop one and a half blocks away, and that if we hurried, we could just make the train.  The smile we shared gave proof through the night that our flag was still there.

Anyway - after dinner and and struggling with the bunks and lights and toilet and tapes and still feeling weak from flu - Oh!, by the way, we did just make the train. As we walked into our compartment, the train pulled away.  We made it on time because Al the cabdriver changed allegiances during our twenty minute quest and drove the last mile like a madman.  He wanted us to win.  And that made all of us - the pawn shop man, the lady customer, the cab driver, Una, Annie, Frank the car attendant who wished us luck for the twenty minute Las Vegas bet - and myself VERY HAPPY!

After settling again and listening to oldies from the Shirelles, etc., and mentally going through the check list to see if there were other things we could do to kill time (if necessary) we three night riders fell softly into sleep ... me in the upper, Una and Annie in the lower - Sherlock Holmes solving a bedtime mystery for us as we fell softly to...

8:00 AM and OGDEN, UTAH - 1/2 hour of wake up - breakfast - a little snooze time and an early arrival in Rawlins - 30 minutes early.  With Annie on my back and Una constantly by my side we walked to the main part of an earlier part of America and into a hardware store - perfectly arranged, display after display; plumbing over there - tools over there, appliances (small TVs, toasters) over there - C.B. stuff, smoke and Smokey detectors over there, a small selection of toys and games and digitals over there and at last ... the Super Glue to repair Una's glasses over there - which was WHY WE CAME TO BE IN RAWLINS, WYOMING IN THAT HARDWARE STORE ON OUR WAY TO DENVER THAT DAY.

Harry Nilsson is a songwriter and performer with several gold albums to his credit.  He recently did the music for the film POPEYE.