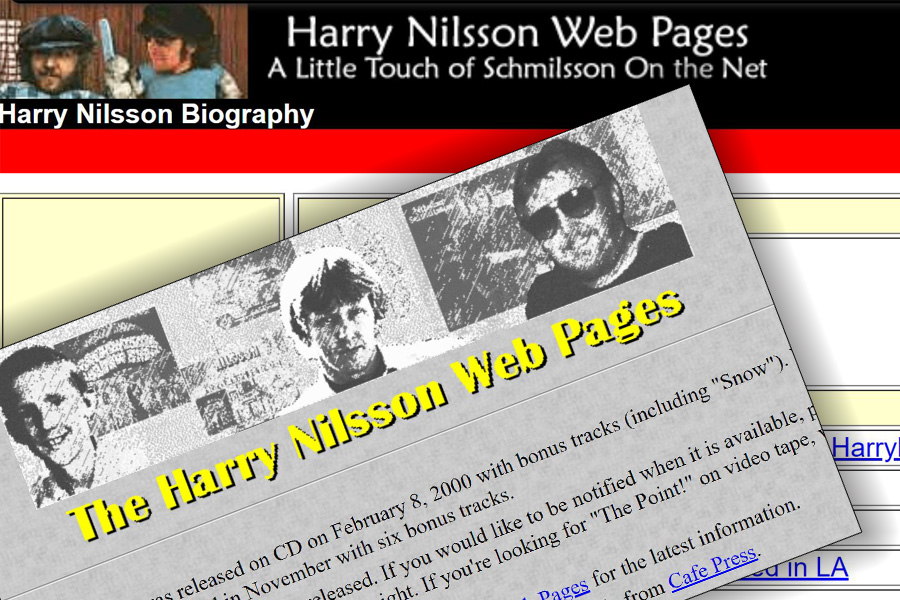 Through the years, the Harry Nilsson Web Pages web site has gone through many iterations. It began with a simple page hosted on my personal account at magicnet.net.

Then it moved to jadebox.com ("Everyone should own a little Jade Box") and began to grow with the help of other fans of Harry Nilsson. For a while, the web site resided at harrynilsson.com before Sony requested the domain.

And now ... the Harry Nilsson Web Pages web site has found a new home at NilssonSchmilsson.com.

Eventually, others will be able to help maintain and update the site, but for now, please be patient as I work to create and maintain the software for the web site while populating it with information about Harry Nilsson and his music.

Two Tin cans and a String - The magicnet.net and Early jadebox.com Days

When I moved to Orlando in late 1994, I signed up for an internet service called magicnet.net. This was during the days of dial-up internet using modems. My magicnet account came with an email address and a whopping five megabytes of space on a web server.

I set about to create my first personal web page. I wrote a few words about myself then started a list by writing "And I enjoy listening to the music of the Beatles, the Who, Harry NIlsson, ....."

So, I created a single page about him and his music and I linked to that page.

Within a few weeks I began receiving email from other fans of Harry. And then I received some emails from people that had actually known him! This was getting interesting.

One email told me that Harry's son, Zak, was talking with fans on AOL. So, I signed up for an AOL account and joined in the discussion.

Eventually, I started a separate mailing list for discussing Harry which allowed anyone on the internet to participate, not just AOL members. I managed the mailing list discussion using software thet I wrote and called "Arrow."

At the same time, I expanded the web page at magicnet.net and eventually moved it to a new domain, jadebox.com. On the cover of the Aerial Ballet album is a handwritten note saying "Everyone should own a little jade box." I took that to heart when choosing the domain name.

With the move to jadebox.com came a new way of maintaining the web site. I wrote a program that generated static web pages, HTML files, from a collection of text files and a Microsoft Access database. I would update the text files and database with new information then run the program. Then I would upload the HTML files to the web server.

How I Invented the Blog

While planning for the first Harryfest, I decided that I would like to be able to update the web site in real time as I attended the event. So, I wrote software that allowed me to update the web site through the web site, sort of like writing entries into a journal and having them immediately published to the world. If I had given the idea a cool name like "Blogging" then you would probably recognize my name as one of the pioneers of the internet.

That interactive server-based software was expanded to host the entire Harry Nilsson Pages web site and allow me to add and update information easily. It maintained lists of things like people and songs and managed relationships like albums to songs.

One of the coolest things is how people helped contribute to the web site. For example, Bruce Ansley got permission from Dawn Eden and her publisher to reproduce her "One Last Touch of Nilsson" article which, at the time, was the most complete biography of Harry. Quite often I would email or write to the author of an online article or one printed in a newspaper or magazine and they would freely give me permission to reproduce the article.

In my excitement to add everything I learned about Harry and his music, though, I made a mistake. I pretty much threw everything I found into the web site. I tried to make sure everything posted to the site was true, or mostly true. But, I didn't keep records of the sources of the information. So, it was more like a site full of trivia and anecdotes than the informative site I wanted it to be.

This Time Things Will Be Different!

With the new, improved NilssonSchmilsson.com, I'm going to try to cite sources for the information presented. This will help verify the information, credit the sources, and provide reference to where you can find additional information.

But ... I'm not turning the site into some sort of stale, boring, academic exercise. Harry always found a way to add whimsey and humor to his music and in that spirit, I will do the same with this web site.

As I mentioned before, I don't plan to do this alone. Sort of like the way Wikipedia works, I am going to allow others to update the web site. The software is not ready yet, but eventually you will be able to log into the site and help create and maintain the Harry Nilsson Web Pages.