Testimony of Harry Nilsson before the United States House of Representatives  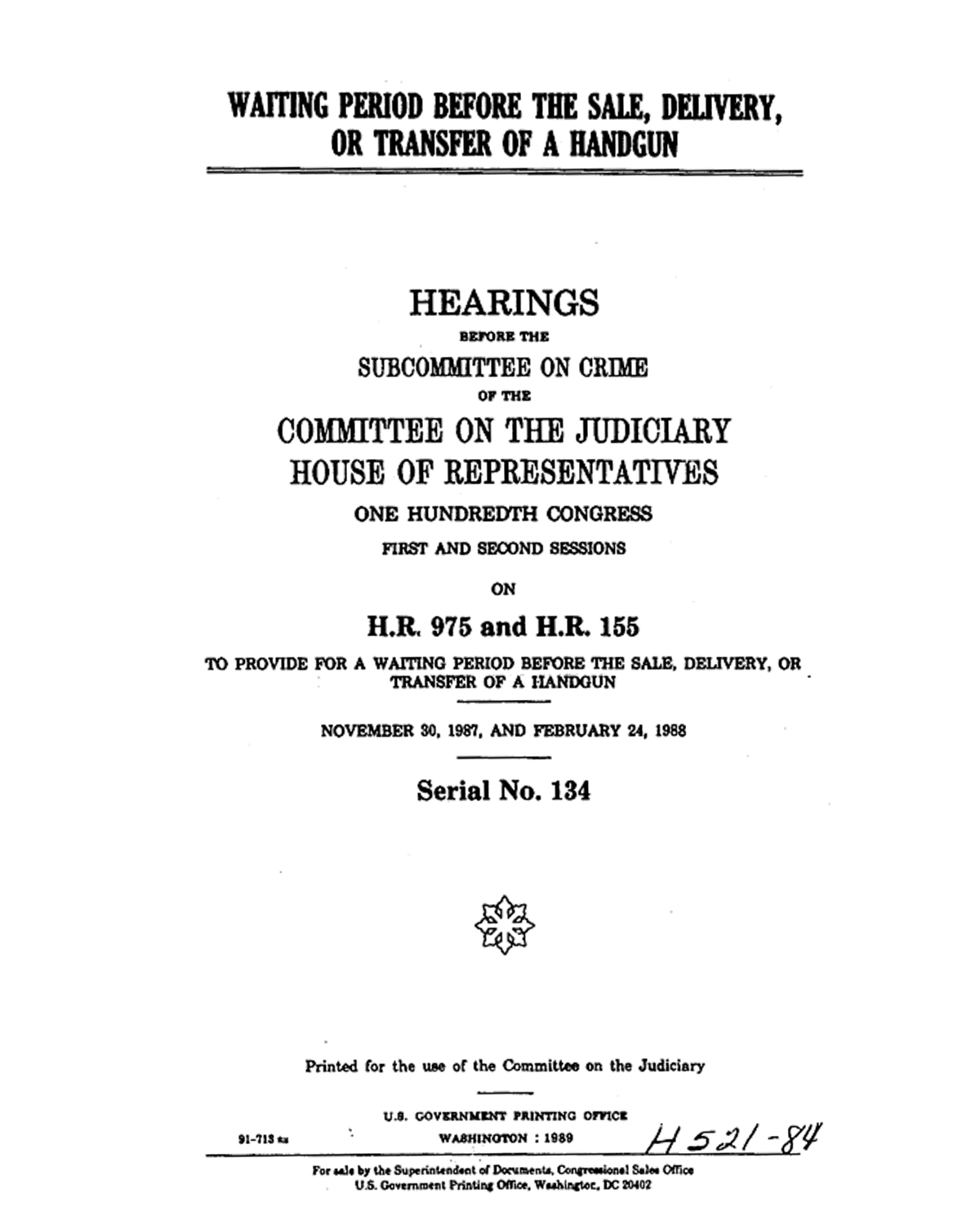 On February 24, 1988, Harry Nilsson testified before the Subcommittee on Crime of the Committee on the Judiciary of the United States House of Representatives. Harry appeared in his capacity as an Executive Committee Member of the National Coalition to Ban Handguns to speak in favor of H.R. 975, A bill to provide for a waiting period before the sale, delivery, or transfer of a handgun.

I would first like to say I am very honored to be here. I would like to compliment Mrs. Brady for her courage and also her responsibility in taking care of her duties as a citizen. I am here for the same purpose.

I am Harry Nilsson and am speaking today on behalf of the National Coalition to Ban Handguns as a member of its executive board.

Although I primarily speak for the thirty-three religious, professional and civic organizations which make up the coalition, I have a personal commitment to ending handgun violence in America. I was always concerned about the issue, but became deeply involved with the coalition seven years ago when my dear friend, John Lennon, became yet another victim.

Today you are hearing testimony on a bill that would be a first important step toward reducing handgun violence in this country. I urge you to support the strictest possible legislation mandating a waiting period and background check.

There are two House bills that deal with waiting periods. Although today's focus may be on H.R. 975, I urge you not to overlook too quickly the merits of H.R. 155, which calls for a fifteen-day waiting period and mandatory background check.

In California, where I live, there is a fifteen-day waiting period before the purchase of every handgun, which makes California's laws among the strictest in the country. Any Federal law that is passed should be at least as strict as the strictest State law already in effect. As California is the most populated State in the country, representing eleven percent of the entire U.S. population, the State's strict waiting period law should serve as a model of the minimum acceptable Federal standard.

This standard will vastly improve laws of many States that have lesser or no waiting periods, such as Mrs. Brady pointed out. In fact, there are several States with waiting periods already in effect that are more strict than H.R. 975 proposes. In total, more than 68 million people, or 28 percent of the U.S. population, already live in States or cities that have stricter laws than what is proposed in the seven-day waiting period bill.

A fifteen-day waiting period allows law enforcement time to complete a more thorough background check. Law enforcement officials in States with seven-day waiting periods have let us know that this time frame affords only sufficient time to complete a computer check for felony convictions. It is wholly insufficient to permit a check of whether the applicant is a member of another prohibited class, for instance, whether the applicant has ever been adjudicated mentally incompetent. Most importantly, a fifteen-day waiting period is but a minor inconvenience to lawful purchasers.

On this point, you have undoubtedly heard from the gun lobbyist that law-abiding citizens will be left without protection, vulnerable to criminal attack for the duration of any waiting period. The reality is a handgun is not a useful self-defense weapon. FBI figures show that only 193 people used a handgun to kill an assailant in self-defense in 1986. In stark contrast 22,000 Americans lost their lives to handgun violence in 1986.

I do not wish to convey the impression that the California law has been the solution to the problem of handgun violence in our State. California still has a significant problem with handgun violence with the freeway shootings and recent gang violence, but the fifteen-day waiting period has stopped thousands of prohibited persons from purchasing handguns, and it also serves as a "cooling-off" period for those who might buy a handgun in the heat of anger and use it impulsively.

The national legislation you are considering today is important in several respects. It will serve to reinforce State laws by setting a national, uniform minimum waiting period. Some of the problems with handgun violence experienced by States with meaningful waiting periods are caused by less stringent regulation in nearby States, as also was pointed out earlier, Virginia and DC, as examples. It is easy to see why we need a national standard. It is not asking a lot when you consider some of the statistics--54,000 persons lost their lives in 1963 to 1973 in Vietnam while 84,000 Americans lost their lives here with handguns. We barely blinked.

A meaningful waiting period and mandatory background check is only the first step in acting to reduce the shameful level of handgun violence afflicting our Nation today. The only real solution to the problem is a complete ban on the private possession of handguns with exceptions for law enforcement, trained security personnel, target shooters who keep their guns at a controlled target range and collectors who disable their weapons.

Only then will America begin to be free of the disease that has claimed the lives of 500,000 Americans since 1968. Only then will we not have to suffer the violent and senseless loss of our friends and families. I don't think I'm overstepping the bounds of friendship when I paraphrase John Lennon: "Imagine there's no handguns. It isn't hard to do."

After listening today, I wonder. It is hard to do. Imagine the fifteen-day waiting period. That isn't so hard to do. Fifteen days isn't asking too much. Seven may be asking not enough. I thank you very much.

Mr. Hughes then asks Sarah Brady (wife of James Brady who was press secretary to president Ronald Reagan) some questions about how John Hinckley purchased the handgun that he used to injure her husband and others in an attempt to assassinate Reagan. Bill McCollum, Republican of Florida's District 5, inserts some questions insinuating that background checks and waiting periods should be left up to the state. Finally the chairman turns to podium over to Lawrence Smith.

Mrs. Brady and Mr. Nilsson, I sat through a lot of testimony today and you sat through it before, and you have heard it before. I hope it doesn't strike you as any more difficult to swallow than it was previously, in previous times or previous years, especially the testimony of the people who were on the last panel.

That is what they are. They are just dead bodies and those over half million since 1968 represent not only dead people, but broken families, broken lives, economic loss of an incredible nature. I find it difficult to hear constantly that argument--"Well, maybe we don't have enough assets."

I haven't the faintest idea, couldn't even postulate on how much more it cost the U.S. Government and the taxpayers for these half million deaths and lost earnings capacity, welfare, which may have had to have been paid afterwards, social security benefits and the likes of the people killed than it would have cost to check all these background forms that might have to be filled out if there was a waiting period and some kind of background check.

I am going to congratulate you for your courage. Mrs. Brady, you have been here before. I am sure that you are frustrated. I am sure that you feel that there are a lot of good people in this country whose will is being thwarted by a small but significant minority.

I feel the same way. Mr. Nilsson, you have lost a friend. I have lost friends. Many of us have been touched with this crime. And I don't know, I really don't know what to do about it anymore. I am almost at a loss. Unless this Congress can throw off the yoke of the NRA, which most of Americans don't subscribe to anyway, over 96 percent of Americans don't, then I don't know how we are ever going to pass this legislation, and I am curious how you think we are going to generate the kind of support we need.

Are we going to be able to get good people out there once and for all to wake up and write letters or do they have to wait around until one of their family members gets maimed or killed. I don't know. I am as frustrated as you are.

NILSSON: Certainly. I am---

SMITH: Anybody that can make an album called Nilsson Schmilsson, has got to be one of the better people. I have it, too.

NILSSON: I like the name, "Mr. Smith Goes to Washington." I am as frustrated as anyone when I hear the talk about what does it cost. Yes, it will cost something, but what is a human life worth? Twenty-two thousand a year is--it can't cost that much if you pro rate or amortize that cost in terms of saving those lives and the broken families.

I also had a family member commit suicide with a handgun and two of my other friends also died because of handguns. Accessibility of handguns is the problem. Organizations for banning them, not confiscating them, banning the future manufacturers, interstate transportation, importation of guns and their parts, specifically plastic guns we talked about earlier, Glock 17s, which have no purpose on earth than to take human life.

How are we going to get it done? We do write letters and talk to each other. I think the best way is to expose the four people here before us and the rest of the country and see what they see when they listen to that lecture.

H.R. 975 was eventually folded into the Brady Handgun Violence Prevention Act (known as the "Brady Bill").