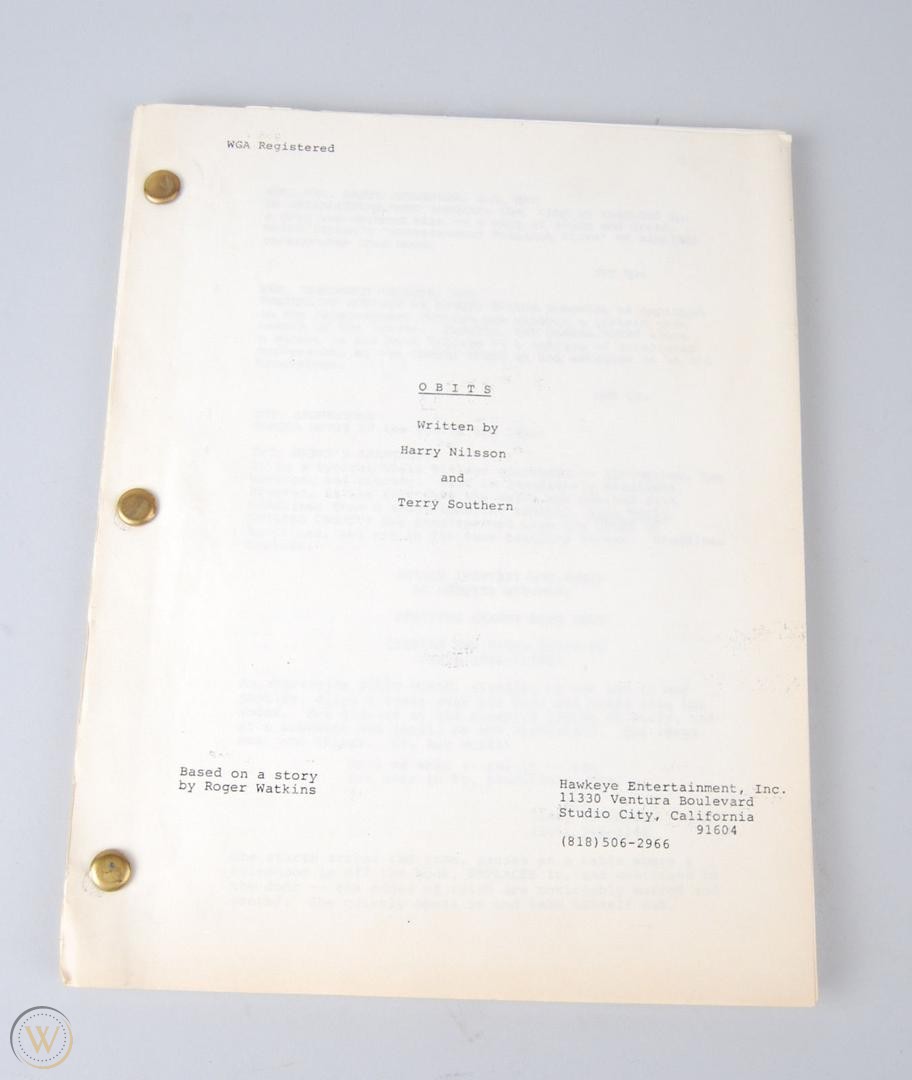 Based on the Screenplay for Obituaries by Roger Watkins

A talk with a bartender about the screenplay he had just written led Roger Watkins to a meeting with Harry Nilsson. Nilsson had recently become interested in making films. Watkins was the writer and director of several films including The Last House on Dead End Street.[1]

I think I'd written Obituaries around 1985. It was not a bad little script - sort of a comedy. The plot concerns a guy who writes headlines for the likes of the National Enquirer - those non-news tabloids that print stupid headlines like "Baby Born with Eight Heads." But at the same time he lives down in St. Mark's Place and cuts out obituaries that appeal to him as being a little off-kilter. He sticks them into a big fish tank, and at one point just reaches in and grabs one at random and decided he's going to find out about the murder behind this particular death. He winds up with this horribly demented family called the Stoats, investigating this murder ... and it turns into this really strange, strange thing.

Anyway, I'm having a drink. I'm talking to the barman who is a cocaine dealer and he says to me "What do you think of Harry Nilsson?" I said, "Oh, I love his music. I've got about fifteen of his albums." He goes, "Well, I deal coke to him and I heard he wants to get into the movies. Why don't you give me your script and see what happens?" I thought, "well, this is really stupid," but you have to follow these things. So I gave him a copy of the script and sure enough, about three weeks later the phone rings and it's Harry Nilsson. He's in this bar down the road and wants to meet me.

He loved my screenplay and wanted to buy it. He kept optioning it for me. I got like three years' worth of options - every month he would give me a check for like $2500. Finally, he did buy it, but it's like two years later when my marriage has crumbled, my health has gone, and it's just a big mess of drugs, alcohol, and debauchery. Also, I hung out with Terry Southern, who I had little respect for. I don't think he ever had an original thought of his own. Even his novels are co-written with other people. I just never liked him.

Then, at some point, there was this little rift because someone called me up and said, "Roger, do you read Us Magazine? Well, you'd better get it because on page nineteen ... I'm not going to tell you because you've got a bad temper ... Just go get it."

So I did and there is Harry and Terry saying how they wrote Obituaries. That really pissed me off and I got into a fist fight in the bar. I was mad. I was furious because everything I've ever done has been ripped off, basically. It was after that that Nilsson actually bought the screenplay from me.

Nilsson optioned Watkins's screenplay which was called Obituaries and eventually purchased the rights to it on July 3, 1985.

On October 23, 1985, Nilsson assigned the rights to Hawkeye Entertainment, the company recently formed by Nilsson and writer Terry Southern.

Nilsson and Southern rewrote the screenplay and changed its name to Obits. According to Roger Watkins, Nilsson and Southern took a "pretty good script" and "utterly ruined it." Watkins describes the rewritten script as "precisely what two drug addicts would come up with at three o'clock in the morning."

On his website[3], they've got this synopsis of his and Southern's ... it's an abomination. It's an embarrassment to me to be even associated with that. It's so amateur and precisely what two drug addicts would come up with at three o'clock in the morning. The original screenplay was nothing like that. But at least Harry paid me.

Everybody Harry met wanted to just kick the shit out of him. The day I'm picking up a check from Harry for $75000 - he's already given me all kinds of money, optioning it and optioning it - Eddie Strausberg comes with me and we're getting loaded and we're all getting along pretty good. Harry and I start talking about William Burroughs. Harry says something to the effect that he fucks little boys and Eddie is like "Huh?" Harry goes "Yes, he likes to fuck little boys. Over in Marrakech you can do that."

Eddie takes this reefer from his pocket, which Harry had given him earlier, breaks it, throws it on the floor and goes, "I ought to kick the shit out of you right here in this fucking bar." So, everybody wanted to beat Nilsson up. It was just unbelievable.

Nilsson and Southern's Obits is a black comedy about a frustrated tabloid reporter who goes to Texas to investigate a strange obituary notice and enters the bizarre, surreal world of a group of crazy millionaires from which he never returns.

As a baby Harry Taylor is dropped on his head. A stylized, rapid-fire montage shows his unhappy childhood. As an adult we see the unstable Harry run from an unseen pursuer. The chase takes us into a surreal and apparently animated world which threatens Harry's life. Suddenly, Harry walks through a seemingly impenetrable wall and enters the offices of News World - a New York City tabloid along the lines of The Enquirer. Harry enters the scene as if he's been there for years. His sexy secretary Betty greets him as he goes through the latest edition of the rag. Harry suddenly notices an unusual obit on Jason Stoat, a wealthy Texas oil man who supposedly died years ago. Harry starts packing. It looks like he's on the trail of another hot story. Manic, lecherous publisher J. D. Striker gives his dramatic brand of approval and Harry makes his way to Crystal City, Texas, the spinach capital of the world, in hopes of interviewing the Stoats.

A faded statue of Popeye stands in the middle of the small-town square. All around, Harry sees the landscape as though it were made up of moving paintings.

Harry finds a bar and strikes up a conversation with Red, the cowbilly barkeep. Red tells Harry about the Popeye statue. It was given to the city by old Granddad Stoat, a man who had a passion for spinach. That was after he struck water and oil turning the desert town into an oasis and his family into millionaires. According to Red, there were twin Stoat sons, both named Jason. That's the reason Harry was confused about the obit. Now, though, his curiosity is piqued, and Harry checks in to the Tony Perkins Motel - taking a room with a view of the old Stoat mansion on the hill. The first thing he sees is a goat head peering out one of the mansion windows. Something mighty strange is going here and Harry aims to find out what it is.

Demented Peirsol Stoat invites Harry into the mansion the next day. Apparently, he was the looney wearing the goat's head. Piersol's loud, overpowering brother Vern takes over. Harry starts to ask questions for his story but is distracted first by Piersol's poor potty training and then by Vern's unabashed sexual inquiries about Marilyn Monroe with whom he obviously has a fixation. That's when entranced Emily Stoat enters the room. Though she has the power of speech, she uses a speak and tell voice box to communicate and we gather she is Vern's sex slave. She wanders about in a night gown and masturbates to a tape recording of Walter Cronkite in her room. After a brief, surreal skate around the Stoat's indoor ice-skating rink, Harry goes home completely baffled.

Later, Harry accepts an invitation to dine with the Stoats. Though it's meant to be a black-tie affair, Vern and Piersol are in western duds and Emily is naked except for her open robe. Vern pulls Harry under the table and they both watch as Emily spreads her legs. Harry is told he is the chosen one. The guests all around them speak in hushed tones as if they weren't really there at all. Vern says that together Emily and Harry will make the Stoat family eternal. Emily begins smothering Harry in kisses and as she does the room seems to transform into a bizarre, animated version of the Beatles' Sgt. Pepper album cover. Harry succumbs and becomes a part of this world with the face of Howdy Dowdy.

Here's how one reviewer reacted to reading the screenplay:

Apparently, the idea here is to create an adult, x-rated fantasy featuring a live-action reporter who enters a make-believe world that might even be the world of his deranged fantasies and fears. Whatever the goal is, it is not at all clear from the way the script is written. The opening sequence is intriguing, but the rest of the story is vague, puerile and offensive.

If one puts aside the many off-color, distasteful scenes long enough to examine the story it shows itself to be completely lacking in logic and continuity. Unlike Roger Rabbit, this fantasy never defines the separate worlds, their origins or shows under what conditions they might come together. Consequently, everything feels arbitrary and confusing. We don't know if the lead is nutty, if he's happened on a haunted house or if the make-believe stories he's been writing have actually come into existence.

The film was never produced.