Ben West and Harry Nilsson founded Cimarron Broadcasting Corp, a publicly-owned corporation in 1982 in Oklahoma City, Oklahoma. West served as president and chief executive officer with Nilsson as Chairman of the Board.

Cimarron Broadcasting Corporation was incorporated on July 21, 1983, in Missouri. It's office was located at 314 N Broadway in St. Louis.

In July of 1983, Cimarron agreed to purchase two TV stations, KECY-TV (El Centro, California) and KESQ-TV (Palm Springs, California), reportedly for $4.5 million. Nilsson planned to build a production facility to produce commercials and television programs for the stations as well as to record albums, music videos, jingles, and other media. Cimarron had earlier tried to buy a television station in Las Vegas, Nevada, but lost out to entertainer Johnny Carson.[1] 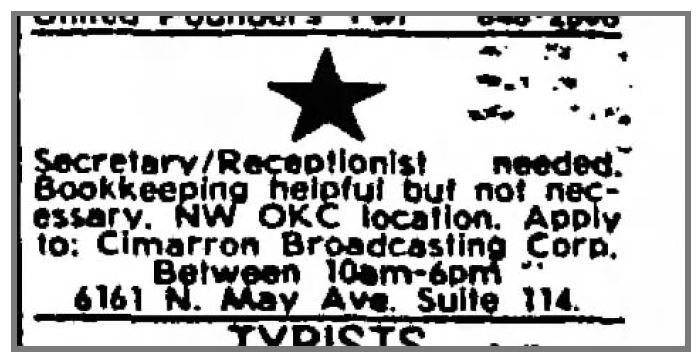 I was sitting in a bar with a friend several years ago and decided I would like to own a bar or a television station. It seemed like the proper combination, or one or the other.

I met up with Ben West one day and we decided we would mold our talents together. I would lend my artistic talents and he would run the television stations we would acquire.

West had experience as the owner of several TV stations.

We compared our talents, kicked around what we each had to contribute and decided, "What the hell."

Cimarron Broadcasting Corporation of California was created on April 4, 1983. Its office was located at 818 West Seventh ST, 2nd Floor in Los Angeles.

Being the chairman of a corporation is kind of exciting to me being a rather proud high school drop out, you know.

Cimarron was unable to complete the deal to purchase the TV stations.[8]

The name "Cimarron" is apparently a reference to the novel (and, later, films) of the same name which was set in Oklahoma (the state where Cimarron Broadcasting Corp was founded). Following a similar pattern, Hawkeye Entertainment is named for the character from the novel Last of the Mohicans which takes place in update New York where Nilsson lived when Hawkeye was founded.