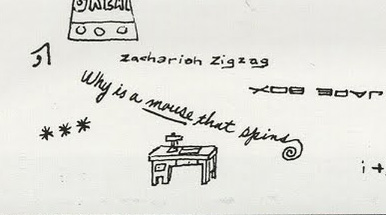 On the back of Harry Nilsson's Aerial Ballet album cover is the cryptic message "Why is a mouse that spins." I suppose I'm not the only Harry fan to have puzzled over the meaning of the phrase. When I asked in the Internet's Harry Nilsson Mailing List if anyone knew what it meant, I really didn't expect an answer. Nevertheless, David Stetson was able to point to a reference. The Guardian Weekly's web page on the Internet (www.guardian.co.uk) has a column called "Notes and Queries." In one edition of the column, a reader asks:

In a Christmas cracker my mother found the conundrum 'Why is a mouse when it spins?' The answer was given as 'Because the higher, the fewer.' Is there any meaning to this?

John Nixon, of Horley, Surrey, responded "this nonsense question was popular among the RAF apprentices at Halton, Bucks, in the early 1950s, when the full version was: 'Why is a mouse when it spins? Because the higher they fly the fewer, and the engine driver's name was Smith. Why was his name Smith? Because his father's name was Smith.' Apart from the logic of the last bit, the repartee had no meaning whatsoever and was probably the precursor of the Monty Python type of humor."

Geoff Black, of Cambridge, added "the correct wording should have been 'Why does a mouse when it spins?' with the then obvious answer 'Higher or lower'. At least that was the version which sixth formers at Quarry Bank High School in Liverpool used in the early 1960s to test the gullibility of younger members of the school such as myself. It was rumored that it had been devised by John Lennon, a pupil at the school until 1959, but perhaps I am being gullible in believing this."

Maurice F. deCogan, of Dalkey, County Dublin, spins his own tale: "1919 - The Black and Tans were prodding the armchairs with bayonets to see if the stuffing was hand-grenades. We kids were lined against the wall. 'When is your husband expected?' the officer asked my mother. 'When is a mouse when she spins?' she replied, adding, to his elevated eyebrows, 'The higher the fewer'. He and we knew the conversation was closed. He gathered his men and left - without finding the wireless transmitter under the aspidistra."

Peter M. Horsey MA, of Stockbury, Sittingbourne, Kent, says that the riddle fist came to his attention when he was a student fresher in 1942: "At the same time another phrase was popular. In answer to any question to which one could give no answer, such as 'Have you seen so-and-so?' or 'Have you read such-and-such?' the reply would be 'No, but my sister rides a bicycle.' There was also a sort of son-of-mouse to which the answer was 'No, but you can clean a straw hat with a lemon.' Unfortunately I've forgotten the question. Although this appears to be so much student nonsense, it taught me the meaning of non sequitur. As Hugh Lloyd said to Tony Hancock in 'The Blood Donor,' 'For things unknown there is no knowing.'"

Finally Patrick Nethercot, of Durham, offers a reasonable explanation: "This peculiar saying relates to a certain type of governor on steam engines, whereby revolutions of the engine are reduced if a spinning weight (mouse) is lifted up a shaft by its centrifugal force, releasing steam pressure and ensuring fewer revs: the higher, the fewer. Such systems were common on static engines like those found originally in cotton mills in the heyday of the steam revolution."

Note: Additional responses have been added on the Guardian's web page since this article was published in 1997.

A more authoritative discussion of the history and meaning of the phrase is found on the website Word Histories which traces the idiom back to the late 1800s.