Harry Nilsson wrote "Tonight Song" as a possible new theme for the Tonight Show when Jay Leno became the host.

On the June 15, 1998, episode of The Tonight Show Ringo Starr was Jay Leno's first guest.

My (soon to be) wife and I visited Los Angeles to attend Harryfest 1998. Before we left Florida, a friend got us tickets to view a taping of The Tonight Show. She got us VIP passes for the taping on June 15. A few days later, she called back to tell us that she had just learned that Ringo Starr was scheduled to be a guest that day.

Harry was Ringo's best friend. We were going to LA to meet other Nilsson fans. And the show was being taped on Harry's birthday. It seemed too perfect, so I asked my friend if we could arrange to give something to Ringo.

She called back to say that we could leave a package, wrapped in clear plastic, with a guard at the NBC gate.

Monday morning, we gathered up some Nilsson-related stuff to put in the package. As we were about to wrap up the package, I noticed that Curtis Armstrong was wearing a promotional Duit on Mon Dei button. I pretty much just looked at him and he handed us the button, We put in on top in the package with a note reading "Dear Ringo. Please wear this button on the show. If you don't, we want it back."

We left to drive to the NBC Studios. I missed the Burbank exit and we arrived late. I illegally parked on the street near the studio (along with dozens of other illegally parked cars) and we went to the VIP guest entrance. I didn't have time to drop the package off at security, so I gave it to an NBC page and expected it to disappear.

We entered the studio and were seated up high in the VIP area. When Ringo was introduced, he walked out. He was wearing a button. Bracha remarked that it looked too big to be our button. I reminded her that Ringo is small. Then we looked up at the monitor and could clearly see that he was wearing the button that we had given him. 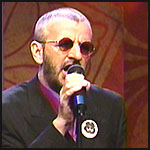 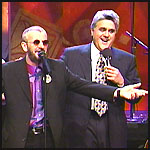 Jay Leno talked with him and Ringo stayed in the guest's chair during the commercial break. Bracha stood, waved, and pointed to her chest - which got Ringo's attention (he married a Bond girl, you know). Ringo looked our way and realized that we were telling him that we had given him the Nilsson button. He smiled and gave us a thumbs up gesture.

Ringo Starr on The Tonight Show