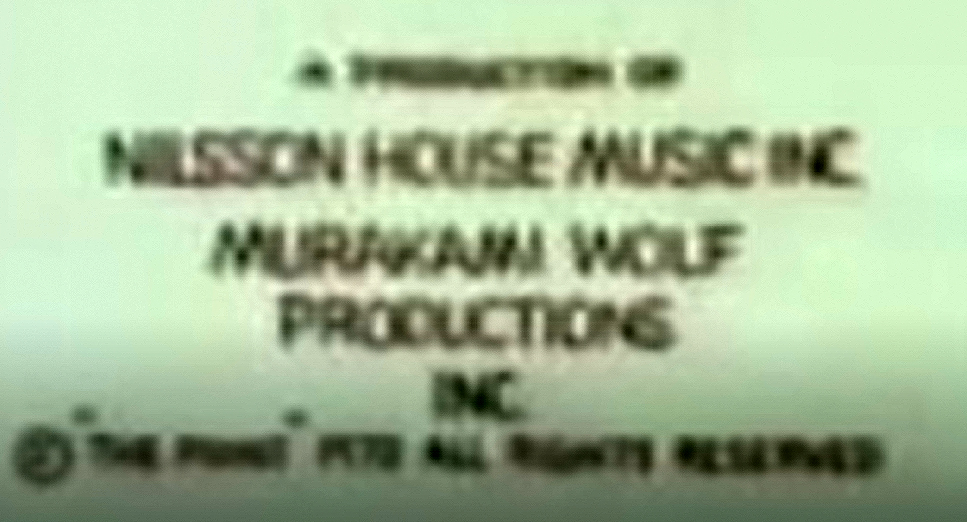 In 2014, Murakami-Wolf-Swenson sued Acme-TV and others for distributing unauthorized copies of The Point!. The defendants claimed that the film was in the public domain since it did not contain a proper copyright notice as required by law at the time that the film was first published (i.e. when it aired on ABC in 1971).

The copyright notice at the end of the film when first aired on TV read:

Since the film was published without a proper copyright notice, the defendants argued that the film was in the public domain.

The plaintiffs, however, contended that a video tape released in 1985 contained a proper copyright notice on the cover and that the copyright had registered at the Library of Congress in 1987.

The judge ruled in favor of the plaintiffs stating that the 1987 copyright was valid since the airing of the TV show was a "public display" of the work and, therefore, was not required to display a copyright notice:

[s]ince the display of a copy does not constitute a publication of the work embodied therein, unless a copy is “publicly distributed,” and not merely displayed, no notice need be placed upon it. Thus, ... an ephemeral image, whether projected upon a theater screen, a television tube, or otherwise, does not constitute a copy, and hence a copyright notice is not required to appear upon such image.

The 1985 VHS tape, however, was publicly distributed, therefore the filing of the 1987 copyright registration did occur within five years of the work's "first publication."

The judge ruled in favor of the plaintiffs.

It seems pretty obvious that even if the film itself had lapsed into the public domain, Harry Nilsson's songs (and, possibly the original story by Carole Beers and Harry Nilsson) would have still been protected by copyright preventing unauthorized distribution of the film.

This is what happened to the move It's a Wonderful Life after Republic Pictures failed to renew its copyright in 1974. TV stations started showing the film and it was released on home video without authorization from Republic. But Republic retained the copyright on the original story and the music so was able to regain control of the classic movie.